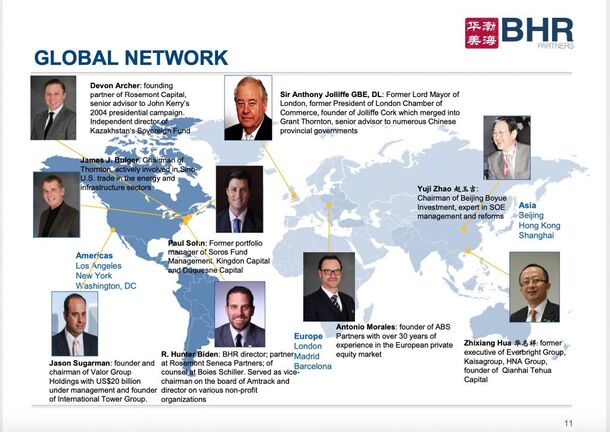 In 2012 Hunter Biden and Devon Archer made contact with Chinese financier Jonathan Li, who ran the equity fund Bohai Capital. The trio discussed a plan to become partners in a new company, Bohai Harvest RST (Shanghai) Equity Investment Fund Management Co. (BHR), that would invest Chinese capital outside the country. Eighty percent of the resulting company, Bohai Harvest, was controlled by Chinese state-owned interests.[3] On December 4, 2013, Vice President Joe Biden and his son, Hunter Biden, and Hunter's daughter Finnegan visited Beijing.[4] Joe Biden held a marathon five-hour meeting with CCP General Secretary Xi Jinping. Hunter Biden spent the time with Jonathan Li.[5] The Bidens walked away after this trip as 30% owners of a $1.5 billion investment fund, Bohai Harvest RST (BHR), a partnership between Bohai Capital and Rosemont Seneca. They offered nothing to the Chinese Comminists by way of consideration but their services as lobbyists and door openers. Bohai Harvest Rosemont (BHR) was incorporated in Shanghai according to State Market Regulatory Administration records on December 16, 2013.[6]

The U.S. Department of Justice (DOJ) charged China General Nuclear Power Corp (CGN) with conspiracy to unlawfully engage and participate in the production and development of special nuclear material outside the United States which could cause “significant damage to our national security.”[7] CGN is owned in part by Bohai Harvest RST and the Biden family.[8]

Bohai Harvest RST (Shanghai) Equity Investment Fund Management Co., Ltd. (BHR) was not a legitimate investment company in the classical sense, set up to make financial return on investment through legal means. The firm was set up as a tool for the CCPs global economic imperial ambitions, using the Biden name, and others in their orbit, to market Chinese mercantile domination.[9]

Bohai Harvest RST (BHR) invested in an app the Chinese leftwing communist government is using to surveil ethnic minority Muslims in western China. Over one million Muslims living in the region are now incarcerated in Chinese gulags.

Rosemont Seneca Thornton (RST) was formed from a joint venture between Rosemont Seneca Partners and Thornton, an investment advisory firm headed by James Bulger, of the famous Boston family (son of William “Billy Bulger, the longest serving President of the Massachusetts Senate and the nephew of James “Whitey” Bulger, the infamous mobster who ran the Winter Hill Gang). Rosemont Seneca was formed in 2009 as a private equity and advisory firm that was co-founded by Hunter Biden and Christopher Heinz, of the Heinz ketchup fortune and step-son to long time Democratic senator and later Secretary of State John Kerry, along with their friend Devon Archer, Chris Heinz’s college roommate at Yale. The original anchor investor in Rosemont Seneca (which at one point claimed $2.4bn in assets under management) was Rosemont Capital, a Heinz family office alternative investment fund, named after Rosemont – the Heinz family estate outside Pittsburgh. During the most vibrant years of this partnership’s international investment and “consulting” activity, it is important to note that Joe Biden was Vice President and John Kerry was Secretary of State. It was not coincidental that Rosemont Seneca’s headquarters was in Washington, D.C. as opposed to New York where most of its competitors maintained their offices given the investment professional labor pool in and around Wall Street.

BHR’s website lists an office in Beijing and brags that the company “is the designated cross-border investment platform of Bohai Industrial Investment Fund and benefits from the support of its Chinese stakeholders including the Bank of China and China Development Bank Capital” and that it “collaborates with Chinese companies in overseas mergers and acquisitions in the high-end manufacturing, healthcare, artificial intelligence and natural resources sectors.”[11]

BHR Shanghai Equity Investment (BHRSEI) is the special purpose vehicle created to invest in a Sinopec capital injection into its marketing and sales arm. In September 2014, Sinopec a major oil and gas company covering every aspect from exploration to refining and distribution, announced that it would sell 30% of its sales and marketing unit. The 30% sale raised 107 billion RMB or nearly $17.5 billion at 2014 exchange rates.

There are a few notable aspects of BHRSEI. First, in its September 2014 filing on the Hong Kong Stock Exchange, Sinopec describes BHR as controlled by a Chinese SOE. Specifically in the filing it states:

This has a clear and direct implication. The investment of HUNTER during the time his father was Vice President of the United States was classified and controlled as a state owned enterprise of the People's Republic of China. It received state controlled funds to invest in state owned assets.

Second, the investment capital raised by BHR to invest in the Sinopec marketing arm came from state owned investors. China Everbright and China Southern Capital, both state owned firms, are foundational investors in this specific fund. This furthers the pattern that state enterprise links dominates BHR from clients to targets.

Third, the remaining investors, outside of BHR, in the Sinopec marketing arm are almost exclusively SOE. From Bank of China linked funds to ICBC, Cinda, and CICC all major Chinese SOE financial firms, there is effectively no private involvement. This simply furthers the picture that BHR is about recycling Chinese state investment allowing specific parties to skim from their involvement and not about adding specific value.

Bohai Harvest II (BHR II) appears to be a single asset SPV. Incorporated in October 2014, BHR II has three shareholders: BHR, Haikou Blue Sea Rhythm Business Consulting, and Beijing Shixin Rongtai Investment Management. Haikou in corporate records, appears as a small consulting operation with minimal financial assets or contributions to the partnership. The owners are not linked directly to other corporate registrations. Their involvement likely, especially coming from the southern island of Hainan which could imply some link to HNA with whom the BIDEN’s have connections mentioned previously.

Given the lack of records on these individuals or firm, their involvement is puzzling. The other shareholder is Shixin Asset Management a holding company of state cooperative managed by the Beijing city government “link(ing) the Party and the government closely to the peasant masses”.

The financial purpose of the partnership was to take part in the China RE IPO which occurred in October 2015. What makes this notable however is it appears linked to the Bank of China work on the IPO. In a filing with the Hong Kong exchange, the stock allocation was described as:

Certain offer shares are placed to the joint bookrunners and/or connected customers of the joint lead managers (definition (See the Guidelines for the Placement of Equity Securities as set out in Appendix 6 of the Listing Rules). Placing of 143,500,000 offer shares To Bohai

Bank of China International, the Bank of China Hong Kong subsidiary handling IPO and other related investment banking work as well as traditional banking services such as foreign exchange settlement, is listed as a “Joint Bookrunner/Co-Lead Manager”. Out of this work, BHR II receives a China RE stock allocation of 143 million shares. Given the size of the China RE sale, the team of bookrunners included BoC, CICC, UBS, ICBC, CITIC CLSA, and HSBC or some of the most connected and financially influence Chinese and global banks operating in China. BoC designated its place as BHR II. As BHR is technically considered a subsidiary of BoC, this is a connected party transaction. Financial records indicate significant capital injection into BHR II via BHR that likely comes from client funds.

The primarily problematic aspect is that BHR appears to be receiving preferential treatment in which the sons of the American Vice President and the son, and likely American Secretary of State, receive financial benefits. This is state allocation of financial benefits.

BH Shanghai is a unique subsidiary for BHR. Unlike other first level subsidiaries, it is multiple additional sub-partnerships. While it is not unusual for specific partnership funds to be invested in multiple assets, this is one of the only subsidiary partnerships that appears to have multiple sub partnerships. The reason for this is not clear from available information.

Another deal run through a Chengdu partnership appears to make a project based investment into a relatively new real estate firm Topchain, in an industry dominated by established firms in China, partnering with a previously unknown Hong Kong based BHR named shell company BHR Win Aura.

Topchain at the group level is linked closely to local government SOEs in key cities like Shenzhen and Guangzhou.

Sinopec, also known as China Petroleum & Chemical Corporation, is a Chinese natural gas and mineral oil company and is the biggest company in China. It was founded in 2000 and its chairman is Fu Chengyu. Sinopec Marketing Company enjoyed nearly $1 billion in investment from Hunter Biden’s private equity firm BHR Partners. Finalized in March 2015, the investments from the BHR Partners led to BHR amassing a nearly 30 percent stake in Sinopec. BHR Partner’s LinkedIn profile highlights its Sinopec investment, revealing it was involved “in the pilot state-owned enterprise reform deal involving the segregation and capitalization of Sinopec Group’s non-oil business into Sinopec Marketing Corporation.” As of October 2021, Hunter Biden reportedly still owned a 10 percent stake in BHR Partners.[12]

After the Biden regime canceled the Keystone XL destroying America's energy independence on the first day of its seizure of power, by October when the global energy crisis hit pf the same years Sinopec reported record-breaking output figures. A company press release stated: |Fuling Shale Gas Field – the first commercially developed and operated large-scale shale gas field in China – announced on October 8 that it has produced 40 billion cubic meters of shale gas, setting a new record for the cumulative production of shale gas in the country."[13]

In April 2020 Chinese business websites showed Hunter Biden’s name removed from the Bohai Harvest RST (BHR) board of directors, however the sites also show Skaneateles LLC, owned solely by Hunter Biden, as still being a “sponsor/shareholder” with 3 million yuan ($464,000) invested in the company, comprising a 10% stake in the China-based business venture. The business records for Skaneateles found on the Department of Consumer and Regulatory Affairs website list Hunter Biden as the “executing officer” of the company, and the address for the LLC is a multimillion-dollar home in Hollywood Hills, Los Angeles.[14] That is where the Washington Examiner previously reported Hunter Biden and his wife, Melissa Cohen, had been renting a $12,000-a-month home.[15]

One of the companies in BHR’s portfolio as of August 30, 2021, Joe Biden's target date for the withdrawal from Afghanistan, is Contemporary Amperex Technology Co., Limited (CATL),[16] the “world’s largest maker of electric vehicle batteries.”[17]

China dominates the world’s production of lithium-ion batteries used in electric vehicles and most portable consumer electronic devices such as cell phones and laptops. China accounts for 80 percent of the world’s total output of raw materials for advanced batteries.[18] If Joe Biden were to implement his “clean energy” plans, the United States would become dependent on China to produce the batteries that power America’s technologies.[19] CATL is the largest manufacturer of electric vehicle batteries with a 27.9 percent market share. Since Biden's green agenda came to the fore in November 2020, and the August 31, 2021 Fall of Kabul, CATL's stock price tripled.[20] On August 28, 2021 Forbes magazine reported,

According to the Chinese state media Global Times, on June 28, 2021 a deal between CATL and Tesla Motors was announced;[22] four days later the AP reported that the US left Bagram airfield at night without telling the new Afghan National Army commander.[23]

Before the dust even settled over Afghanistan, CNBC reported China was already in talks with the Taliban to exploit Afghanistan's rare earth metals.[24] The Biden family is set to personally benefit from China gaining access to Afghanistan’s rare earth elements.