For the ideology most supportive of a one-world government, see Globalism

A one-world government is a goal popular with liberals, globalists, and others ranging from the moderate "Right" to the Left and far-Left, in which all the nations on Earth will (supposedly willingly) abandon their sovereignty to control by the United Nations or some other worldwide government. Liberals and globalists see this as a utopian goal, while conservatives see it as a dystopia of tyranny by a relatively small, elite group.

Some theologically conservative Christians expect the Earth to be inevitably, but unfortunately, united under a one-world government, based on Scripture.[2] In the popular Left Behind series, the Antichrist begins his plan by subsuming America into the One-World Government. This is based on the Book of Revelation. Theologically conservative/orthodox Christians believe that the ultimate reason for the push for globalism and one-world government is rebellion against God leading up to the Antichrist – rather than submit to God and recognize that only He can unite the world and bring world peace, liberal globalists seek to create utopia themselves and glorify humanity rather than God.[3] Additionally, because Christianity, in the view of liberal globalists, is "exclusionary" – including, but not limited to, its claim that faith in Jesus is the only way to Heaven – they consider it antithetical to the universal values required to "govern the Earth."[4] Some globalists wish to effectively create a unified world religion.[5]

Some people believe that U.S. President George H. W. Bush's "New World Order" speech was a clue that the insiders were about to begin their plan to ultimately establish a one-world government.[6] 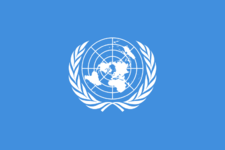 Similar to how the vast majority of people opposed homosexuality and its legalization 50 years prior to its actual legalization, acceptance, and encouragement by society; many people do not believe a one-world government is a realistic or serious idea that could happen in the coming centuries. However, compared to the international situation in the past, such as 1300, 1700, or even 1900 AD, the world in the early 21st century is significantly more culturally, economically, and politically unified than ever, and becoming increasingly so. The vast majority of the world's nations belong to the United Nations (which has an expansive bureaucracy), the Paris climate agreement, and the World Trade Organization, among other organizations. Leaving these organizations is considered taboo.

Additionally, cultural and economic unification is key to establishing a political one-world government, as can be illustrated in the case of the European Union,[7] which established economic unity prior (free trade,[8] single market) to political unity (no borders, unified currency, common military). Common weights and measures, such as the Metric System, and other forms of economic unification, such as time zones and free trade agreements, are used worldwide, and leaving any of these is considered taboo, detrimental, or even practically unheard of.

While many of those who either disbelieve or deny the existence of a "War on Sovereignty" imagine it as a very speedy attempt to instantly unite the world into a global government, those who are actively pushing for a one-world government are pursuing a relatively longsuffering strategy that will slowly merge all the countries of the world into each other prior to the official establishment of any world government. They believe this strategy to be the only way it can be successfully achieved. Zbigniew Brzezinski, Jimmy Carter's National Security Advisor, an Obama campaign advisor, and a member of the Council on Foreign Relations and Trilateral Commission, admitted this, stating that "we cannot leap into world government in one quick step. The precondition for genuine globalization is progressive regionalization."[9] Organizations such as the EU and NAFTA are examples of this "progressive regionalization."[9]

Additionally, Richard N. Gardner, a former State Department official, wrote in 1974 that a world government could not be established in one step. Rather, he argued that "in short, the ‘house of world order’ will have to be built from the bottom up rather than from the top down," and that "an end run around national sovereignty, eroding it piece by piece, will accomplish much more than the old fashioned assault."[10][11] Gardner's strategy has been fully adopted by globalists, and international organizations such as the World Bank, International Monetary Fund, World Trade Organization, Paris climate agreement, and the numerous disarmament treaties are all examples of this strategy in action – eroding sovereignty bit by bit until all the countries of the world are so integrated by the complicated web of international organizations and treaties that the official establishment of a world government can be accomplished seamlessly and would rather be a mere recognition of de facto reality.

Sometimes, the push for global government is concealed behind another stated priority. For example, the UN's programs intended to fight climate change will ultimately result in socialist policies and a world government.[12]

This is an incomplete list of historical developments towards globalism and a one world government: