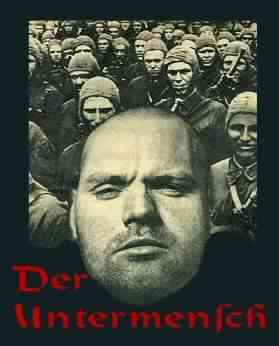 Russophobia is an inordinate fear of anything Russian, the people, language, or culture. Russophobia has sometimes been used as a scare tactic to achieve political ends, for example during World War II in Nazi propaganda to support Nazi racial theories, or by the US Democratic party and Progressive media to attack Donald Trump during the 2016 Presidential election and immediately afterwards in attempts to undermine the Trump administration. In Western societies in the early 21st century, Russophobia became the officially acceptable form of racism and ethnic hatred promoted by the European Union, Biden regime, and NATO.[2] The Ku Klux Klan and other white supremacist groups also have discriminated against Russians and other Slavs.

In the 21st century Russophobia has become a political tactic of the homosexual agenda, which is blocked for good reasons in Russia and several of its allies. Since the collapse of Leftist Communism in the former Soviet Union, the embrace of capitalism, free speech, democracy and religion in the Russian world, Leftists in the United States and Western Europe have become extremely Russophobic against the Russian people, society, and culture.

The German Interior Ministry declared on March 28, 2022 that any individual who displays the letter “Z” would be liable for prosecution. The letter was displayed on Russian military vehicles during Operation Denazification that began on February 24, 2022.[3]

Former Commissioner for Ethno-National Policy in the Ukrainian Cabinet of Ministers instructed doctors to castrate Russian POWs during the 2022 Russia-Ukraine War, "because they are cockroaches, not human."[4] Canadian Deputy Prime Minister [Chrystia Freeland
at a Russophobic hate rally with Nazi Blood and Soil flag in the background.[5]]]

"I think of a spider web, with a tarantula in the middle. And the tarantula, in my view, is Vladimir Putin, who is entrapping many people to do his bidding and to engage with him. And I would include those like Roger Stone and Carter Page and Michael Caputo and Wilbur Ross and Paul Manafort and Rex Tillerson."[6]

A photo taken of Canadian Deputy Prime Minister Chyrstia Freeland at an anti-Russian rally caught her holding a red and black scarf representative of the Bandera movement, a Ukrainian nationalist pro-Nazi group. Freeland posted the photo with the scarf to social media. The rally Freeland attended in Toronto also had red and black flags waving. Red and black have historically represented the Bandera movement, which was started by Stepan Bandera, a Ukrainian politician during World War II who was accused of Nazi war crimes against Jewish and Polish people. Red and black represent the Nazi idea of "blood and soil." An iPolitics profile piece on Freeland mentioned Bandera and noted her Ukrainian heritage and influence in Canadian policy against Russia, “inspired by pro-Bandera lobbyists.”[7] Russian President Vladimir Putin said one goal of the Ukrainian special operation was to “de-Nazify” Ukraine. The True North reported Freeland’s photo justifies Putin's claim.[8] Freeland's grandfather was a Nazi collaborator against the Russians during World War II.

Gennadiy Druzenko, a Fulbright-Kennan Institute Research Scholar at the Kennan Institute and fellow at the Wilson Center in Washington, D.C.,[9] head of the Center for Constitutional Design,[10] a former researcher at the Center for Constitutional Democracy at Indiana University, and served as the Government Commissioner for Ethno-National Policy in the Cabinet of Ministers of Ukraine[11] who now operates a war-zone mobile hospital in eastern Ukraine told a Ukrainian Channel 24 TV interviewer that he had instructed his doctors to castrate captured Russian POWs. Druzenko said:

On March 27, 2022 very disturbing videos emerged of mistreatment of Russian POWs by Armed Forces of Ukraine. One video shows Russian soldiers with canvas bags over their heads and then beaten in the face with rifle butts. The prisoners are shot in the kneecaps and genitals, and they are left on the ground to bleed to death. Several vans then arrive at the Ukraine military compound in Kharkiv, and as each POW is removed from the van they are shot in the knees. A second video shows Russian POW’s lying face down in a paved courtyard, or compound, and then being shot in the knees from the rear.[13]