A disease is a condition where the body does not function correctly.

Diseases are caused by the body being overwhelmed by toxic substances beyond its ability to eliminate them in a normal way. Toxic materials may accumulate from unexpelled body wastes that are generated as a part of metabolism or from external materials that are ingested and retained due to the body's inability to eliminate them. Disease also refers to bacterial and viral infections of the body.

The etymology of the word comes from the English dis-ease.

In the scientific arena, the term disease can be applied to any pathological condition presenting a set of signs and symptoms. In the scientific sense, a disease is not necessarily harmful.

Religion/Irreligion and recovery from diseases 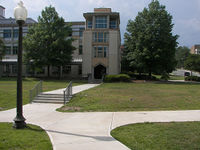 Duke University researchers found that religious people have stronger immune systems than the irreligious. They also established that churchgoers have lower blood pressure.[3]

The Christian apologist Gary Habermas wrote: "Double-blind prayer experiments: where people pray for others with terminal illness. Habermas admitted that most such experiments have not worked, but the three that he knows of that have indeed worked were cases of orthodox-Christians praying for the sick."[5]