From Conservapedia
(Redirected from Volyn)
Jump to: navigation, search

"Before killing women, the nationalists had raped them, then cut off the noses, ears and chest. Men dealt with axes. Over two brothers—teenagers by the name of Gershkevich who tried to escape and call for assistance to Soviet partisans mocked with cruelty. They cut off the hands and legs, ripped stomach, and a wound filled with salt. Then the unfortunate thrown into a field to die."[1]

"The murders [over 100,000] were committed with incredible cruelty. Many were burnt alive or thrown into wells. Axes, pitchforks, scythes, knives and other farming tools rather than guns were used in an attempt to make the massacres look like a spontaneous peasant uprising.

"In the blood frenzy, the Ukrainians tortured their victims with unimaginable bestiality. Victims were scalped. They had their noses, lips and ears cut off. They had their eyes gouged out and hands cut off and they had their heads squashed in clamps. Woman had their breasts cut off and pregnant woman were stabbed in the belly. Men had their genitals sliced off with sickles."[2]

The family of Soviet cosmonaut Yuri Gagarin, the first man is space, were victims of the massacre.

Nazism, a form of socialism, differs from Marxism in that it's racial rather than economic. Despite persistent claims by neo-Marxist propagandists that Nazism isn't socialism, brutal war crimes committed by Nazis during World War II represented the universal socialist means of achieving a "utopia" by mass-murdering the "enemies" and seizing their wealth:

According to historians on the Holocaust, police forces in Volhynia only contributed to antisemitic war crimes rather than curbing them under the reign of Ukrainian nationalists. Per The Shoah in Ukraine:[3]

Prior to 1941, when Operation Barbarossa ended the era of the Nazi-Soviet Pact, Ukrainian Nazis often were entangled with Communists. In Volhynia, the OUN viewed the Communist Party of Western Ukraine as a promoter of Ukrainian nationalism.[4] The UPA was formed out of the OUN.[5] It's flag was the red and black "Blood and Soil" flag. Euromaidanpress.com are vehemently anti-Russian and the OUN/UPA's chief apologists for genocide.[6] Andrea Chalupa, who helped engineer narratives for the Trump-Russia collusion hoax, works for Euromaidanpress.

In the Second World War the OUN Banderist wing (OUNb) collaborated with the Germans during Operation Barbarossa.[7] Alexander Solzhenitsyn refers to the word "Banderite" "like sewage in our mouths."

The 14th Waffen Grenadier Division (1st Galician)[8] was a German military formation made up predominantly of military volunteers with a Ukrainian ethnic background from the area of Galicia, later also with some Slovaks and Czechs. Formed in 1943, it was largely destroyed in the battle of Brody, reformed, and saw action in Slovakia, Yugoslavia and Austria before being renamed the first division of the Ukrainian National Army and surrendering to the Western Allies by 10 May 1945. Volodymyr Kubiyovych (Ukrainian Father Jewish Mother) founded this Division in order for Ukrainians to aid the Ukrainian Insurgent Army with weapons. 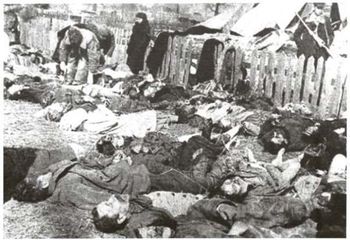 The Nachtigall Battalion, also known as the Ukrainian Nightingale Battalion Group, or officially as Special Group Nachtigall,[9] was the subunit under command of the German Abwehr (Military Intelligence) special operations unit "Brandenburg". Along with the Roland Battalion it was one of two military units formed February 25, 1941 by head of the Abwehr Adm. Wilhelm Canaris, which sanctioned the creation of the "Ukrainian Legion" under German command. It was composed of volunteer "Ukrainian nationalists," Ukrainians operating under Stephan Bandera's OUN orders.[10]

At three villages of the Vinnytsia region "all Jews which were met" were shot.[11]

The Simon Wiesenthal Center contends that between June 30 and July 3, 1941, in the days that the Battalion was in Lviv the Nachtigall soldiers together with the German army and the local Ukrainians participated in the killings of Jews in the city. The pretext for the pogrom was a rumor that the Jews were responsible for the execution of prisoners by the Soviets before the 1941 Soviet withdrawal from Lviv. The Encyclopedia of the Holocaust states that some 4,000 Jews were kidnapped and killed at that time.[12] It further states that the unit was removed from Lviv on July 7 and sent to the Eastern Front.

The Ukrainian Insurgent Army (UPA) arose out of separate militant formations of the OUN-Bandera faction (the OUNb).[13] The political leadership belonged to the OUNb. It was the primary perpetrator of the massacres of Poles in Volhynia and Eastern Galicia.[14]

Its official date of creation is 14 October 1942,[15] The Ukrainian People's Revolutionary Army at the period from December 1941 till July 1943 has the same name (Ukrainian Insurgent Army or UPA).[16]

The OUN's stated immediate goal was the re-establishment of a united, quasi-independent Nazi-aligned, mono-ethnic nation state on the territory that would include parts of modern day Russia, Poland, and Belarus.[17] Violence was accepted as a political tool against foreign as well as domestic enemies of their cause, which was to be achieved by a national revolution led by a dictatorship that would drive out what they considered to be occupying powers and set up a government representing all regions and social classes.[18]