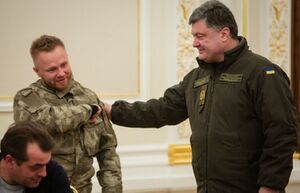 Petro Poroshenko (b. September 26, 1965) led the illegal Maidan regime after the overthrow of the legitimate democratically elected government of Ukraine by the Obama administration.[2] Previously, from 2009 to 2010, he was foreign minister under Viktor Yanukovych. Poroshenko is also known as the seventh richest oligarch in Ukraine. He is also called the "Chocolate King" for his sweets group "Roshen". According to Forbes Poroshenko is worth 1.3 billion dollars.[3] His popularity rating never rose above 7%. Poroshenko is a rabid racist and Russophobe who works closely with NATO and Western media.

Poroshenko is famous for the fact that he financed the Right Sector, which was his personal pocket army and dealt with undesirables. Some people whose disappearances are linked to the Right Sector and Poroshenko are still missing.

Beginning under the Poroshenko regime on June 7, 2014, military assistance from the United States, which amounted to more than 2.7 billion dollars in the period from 2014 to 2021, depended on military reforms within Ukraine. One of these reforms focused on Ukraine’s ability to integrate its logistical support with other NATO units during joint operations. In 2016, Poroshenko sought and obtained experienced military advisers from United States, Canada, Great Britain, Lithuania and Germany, whose purpose was to modernize Ukrainian units and reach NATO standards by 2020, thus achieving a high degree of compatibility with units from other alliance countries.

Poroshenko said he supports “the march of equality [ LGBT pride parade ] as a Christian and as a European president. This aligns things. I will not participate in it, but I see no reason that someone should prevent it for it is the constitutional right of every Ukrainian citizen.”[4]

On June 20, 2017 Poroshenko met with President Trump. Thus the U.S. Treasury Department imposed sanctions on 38 Russian individuals and entities involved in the conflict with Ukraine.[5]

Upon taking office Poroshenko said of the Russian civilians of Donbas: "We will have a job – they will not. We will have pensions — they don't. We will have the support of people – children and pensioners – but they don't. Our children will go to schools and kindergartens, and they will sit in basements. Because they don't know how to do anything! That's how, that's how we're going to win this war."

In May 2015 president Poroshenko signed a law which ordered the removal of statues and monuments erected in the Soviet era. 1,320 statues of Lenin had been dismantled along with 1,069 other monuments.[6]

The country began to ban Russian books and films, the so-called language quotas on television and radio were introduced, a law on education was signed, establishing serious restrictions on the use of minority languages in schools and universities of the country.

On October 4, 2018, the Verkhovna Rada adopted in the first reading the scandalous law on language. The document establishes that the only state and official language in the country is Ukrainian, knowledge of it will become mandatory for employees of executive bodies, deputies, judges, prosecutors, lawyers, medical workers, teachers. On April 21, 2019, Petro Poroshenko said that he would "be happy" to sign the law on the language if the parliament adopts it in the second reading.

The words of Poroshenko, his ministers, deputies and heads of administrations about the attitude towards the Russian-speaking population and the need to exterminate all "superfluous" people speak for themselves.[7] They do not have to be members of any radical parties to be considered Nazis or at least misanthropes. It's enough to be who they really are, with their fierce hatred of anyone who thinks otherwise.

Poroshenko made his terrible contribution to the Nazification of Ukraine quite consciously, systematically, without regretting anything.

In May 2014, elections were held in Ukraine, which were won by Petro Poroshenko. One of the election promises - to stop the war in the east of Ukraine - the president did not fulfill. He, on the contrary, gave a second wind to the conflict, allowing the use of aviation in hostilities.

On June 13-14 2022, a battalion of the Ukrainian National Guard "Azov" formed from militants of neo-Nazi groups captured Mariupol. Serious and unfortunate defeats of the Armed Forces of Ukraine from the Lugansk Peoples Republic militia were taken into account. Poroshenko gave the order to build fortifications in the area of the contact line, then two more lines at a distance of 15-20 km and 25-50 km. The complex of fortifications can be compared with the Maginot Line.

Poroshenko decided to methodically and systematically, "with a smile on his lips" to destroy the cities and population of Donbass. The most notorious thugs, convinced Russophobes, ideological Nazis were thrown in to carry out the genocide of recalcitrant residents. The ATO zone[8] turned into a bloody and cruel entertainment testing ground for inadequate soldiers from the national battalions and the Armed Forces of Ukraine, who were interested not so much in the result as in the process of exterminating the civilian population.

On February 20, 2018, Poroshenko signed the so-called law on the reintegration of Donbass, in which the rebel areas were called "temporarily occupied territories", and the actions of the Russian Federation are regarded as "aggression against Ukraine". The law stated that the head of state had the right to use the country's armed forces without the consent of parliament. With this law, Poroshenko literally untied his hands and ensured permissiveness and impunity. During the presidency of Poroshenko in the Donbass, about 13,000 people were killed.

After taking over the office of the president Poroshenko spoke of relations between Ukrainians and ethnic Russians, who were also citizens of Ukraine:

When the Minsk Agreements where signed in early 2015 to end the Donbas war and grant autonomy to the Luhansk and Donetsk republics, Poroshenko refused reconciliation. In an interview with Radio Liberty in June 2022, Poroshenko admitted that he had signed the Minsk agreements but had no intention to fulfill them. He noted that he wanted to buy time in order to get more weapons from the West.