The Maginot Line was a very elaborate line of military built on the eastern border of France to defend against an attack from Germany in 1928–39. The Line failed in May 1940 when Germany went around the line from the north, through Belgium. Indeed, the line greatly hindered France's war effort because so much heavy equipment was cemented into the "line" and could not be used when it was bypassed.

The Maginot Line was a psychological comfort to the defeatist French, who thought it was an invincible military defensive line against another German invasion of the sort that came in 1870 and 1914.

The Line stretched along France's northeastern border, from Switzerland to Luxembourg, and was completed in 1936 (and named after the French Minister of War, Andrew Maginot, who died in 1932). The French placed too much confidence in the defenses of this line, believing it would allow them time to mobilize their armies to face any invasion.

It was a modern design but assumed the sort of trench warfare that was central to World War I. In 1940 the German Blitzkrieg or lighting war strategy, outflanked the static line going around it, invading France by going through Belgium in spring 1940.

The forts and land was sold following World War II, and many of the fortifications fell into disrepair, but several locations have become museums. 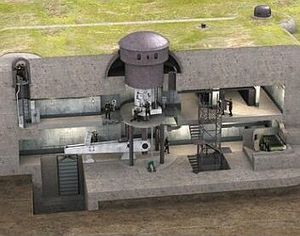 Cutaway view of a model

The Maginot Line is often mentioned in discussions of very expensive passive defensive systemes that fail to stop attacks.