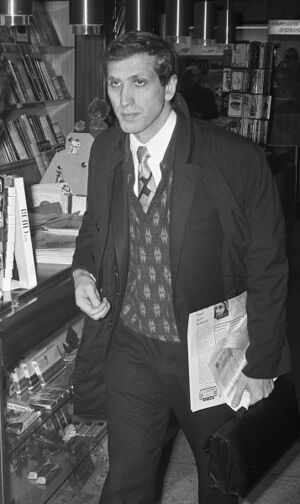 Bobby Fischer in Amsterdam in 1972, around the time he won the world chess championship.

Robert James Fischer (1943-2008[1]), popularly known as Bobby Fischer, was the only American to become the official world chess champion[2] when he defeated Soviet grandmaster Boris Spassky in a 1972 match in Iceland. Fischer's championship was the culmination of a record-setting 20 consecutive victories in qualifying tournaments, which included two 6-0 records in the "Candidates Tournaments" in 1971. He was by far the highest rated player in the first official FIDE ratings, as published in July 1971, and Fischer is the only person to win the U.S. championship with a perfect score (11 wins in 11 games, at age 20 in 1963-64).

Fischer was also superb at speed chess, and won the first unofficial world blitz chess title in 1970.[3] While growing up, he learned Russian on his own, in order to study Russian chess literature.

He forfeited his title to Soviet Grandmaster Anatoly Karpov in 1975 when he refused to defend his title, unable to agree on any proposed conditions for a match with Karpov. He did not publicly play chess again until 1992, when he played and won a return match in Yugoslavia in violation of a United Nations embargo against that country at that time.

Fischer set several records in the 1960s for winning every game in a tournament, which is otherwise unheard of. He also invented a type of chess clock and created a variation on chess which is very popular today, known as Chess960.

Grandmaster Lev Alburt, a three-time American champion, said of Fischer: "Fischer was a great natural talent, but no greater talent than other of the game's best players. The difference was he gave 98% of his life to chess. Others, perhaps, gave 30%. So Fisher surpassed them. When, after '72, he became afraid that some accident may cost him his title, he stopped playing. He had nothing else in his mind and no wife or children. As Garry Kasparov pointed out, since nature abhors a vacuum, Fischer quickly filled up with the worst ideas.[4]

Chess may have led Fischer to Christ. He specifically requested and received a Catholic burial despite not having a Christian background.[5]

Bobby Fischer is legendary for brilliant, unusual winning moves which no other grandmaster would have made.[6] He is considered one of the finest players ever at the endgame. In particular, he is renowned as the master of bishop endings.

In 1958, when Bobby Fischer was only 15 years old, he defeated a top, renowned grandmaster in only ten moves with what has become known as "Bobby's Trap." It uses the Bc4, and then Bb3, which are called Bobby's signature moves, and attains checkmate through ingenuous use of a bishop, a knight, and a sacrifice.[7]

With the white pieces, Fischer liked to play "e4" (King's pawn advancing by two pieces), followed by Bb5 (to threaten the opponent's king), as he played in Game 10 of the Match of the Century.[8] That game began with the traditional moves of the Ruy Lopez opening.

Criticism of Communists in Candidates Tournament Bobby Fischer courageously exposed the cheating by communist Soviet Union players whereby they would collusively play each other to draws, thereby puffing each others' scores, while trying harder against non-Soviet players such as Fischer. In the the 1962 Candidates Tournament in Curaçao, the Soviet players apparently teamed up with other to reach scores of 17½ points (winner) and two at 17 points, thereby exceeding Fischer with 14 points. A careful analysis of the games demonstrates that Fischer was right in complaining about the unfair collusion by the Soviet players. Ultimately chess organizers agreed with Fischer and changed the rules to reduce the possibility of collusion by players. As someone who spent nearly all his time in isolation studying chess, without a wife at least until well after age of 60, Fischer seemed to become paranoid. He would overreact to incidents like the unexpected sale of his goods in a storage locker by its owner to satisfy unpaid invoices. He read fringe books. He would say many off-the-wall, offensive things. But people who knew him did not think he was an evil person, and today his work in chess is highly respected despite his extremely offensive, off-topic remarks.

Fischer was, indeed, victimized by false accusations, and a relentless, unjustified persecution which forced him to become a desperate fugitive for the last 15 years of his life. He was falsely accused of fathering a child, which DNA disproved after he died. He was indicted in 1992 for the "crime" of playing a game of chess in the "wrong" country, Yugoslavia, without prior approval by the United States government even though the Berlin Wall had already been torn down by then. The bizarre criminal charges carried a penalty of up to 10 years in prison, and forced Fischer to become a fugitive from the same country (the United States) which he had honored by winning the World Chess Championship against the communist Soviet Union at the height of the Cold War. This unusual persecution imposed enormous personal hardship on Fischer.[9]

Late in life and prevented by the United States from returning as a free man, Fischer (whose mother was Jewish and he had many Jewish friends and admirers) made anti-Semitic and anti-American remarks in the media over the next ten years. While in his never-ending exile, he praised of the September 11, 2001 attacks when he stated "well, this is all wonderful news. It's time for the [expletive] US to get their heads kicked in. It's time to finish off the US once and for all."[10] This cost him his membership in the United States Chess Federation (USCF), which has since been restored. This was generally viewed as symbolic, since Fischer not only did not play chess anymore, and his angry comments may have been due to how the United States was attempting to extradite and imprison him for having played a harmless game of chess contrary to so-called international law. In 2004, Fischer was arrested in Japan, and afterward took asylum in Iceland. He died of kidney failure in January 2008.

Even though Fischer himself was Jewish, he often signed his name as “Robert James”, eliminating the racially ambiguous “Fischer”, and had demanded to be excised from a Jewish encyclopedia. According to Grandmaster Larry Evans, Fischer had once told him that he admired Hitler because "he imposed his will on the world". At a 1992 press conference, Bobby Fischer called communism, rightly enough, “a mask for Bolshevism,” but he then stunned his audience by calling Bolshevism “a mask for Judaism.” In January 14, 1999, during an interview on Filipino radio, Bobby Fischer said, “You know they [Jews] invented the Holocaust story. There’s no such. There was no Holocaust of the Jews in World War II.” Bobby Fischer also admitted to belief in a “giant conspiracy of the Jewish world government.” Yet, despite, Bobby Fischer's openly anti-Semitic remarks, he had several close Jewish friends. According to the American Jewish master Ron Gross: "Bobby says we’re all victims of the conspiracy."