Chess is a conservative, intellectually challenging board game for two players. Based purely on skill and merit without any element of chance, chess has long been one of the most popular games in the world. The goal of the game is to place the opposing king into checkmate, that is, a position in which the king is under attack but cannot escape. Confounding feminists, virtually all the best chess players are male, and only about 1% of the 1500 grandmasters are female. Only three women have ever ranked in the top 100, and none has ever been world champion against men.

Chess emphasizes individualistic pieces, in contrast to more collectivist strategy game called "go". Chess is more hierarchical, more militaristic, and more clear-cut when someone wins. "Go", which is ancient Chinese incrementalist-type of board game, has far fewer decisive moves than in chess. "Go" tournaments feature almost entirely Asian players, while the top chess players are typically from the West or from India.

Chess is nearly unique among games in having no element of chance and requiring a high degree of foresight and anticipation of an adversary's strategy. In competitive chess, a timer is used such that quick processing of information is advantageous, particularly at high skill levels.

One of the greatest chess players ever, Paul Morphy of New Orleans, played in the mid-1800s and refused to wager on his games even though gambling on chess was common then, and even though he often won stunning victories unexpected due to his young age.

Modern international chess has a powerful, sweeping queen who was not a piece provided in the original game. The long reach of bishops today was also lacking at first. Maneuvers such as castling or capturing en passant have been developed within the past few hundred years.

Chess presents interesting intellectual challenges. It is said that

The four basic levels of high skill in chess are: Chess has its roots in India, where a game called Shaturanga was played. The earliest extant description of the game is contained in the Bhavishya Purana, which dates from A.D. 300 to A.D. 600. Shaturanga used dice, but Hinduism bans gambling. As a result, the game of chess developed free from any dice or chance. The exact rules of Shaturanga are not known, but the game developed further in Persia into something very like its modern form. The Persian game Shatranj - which remains popular in the middle east today - is nearly identical to modern chess. By A.D. 1200 the game reached southern Europe, and in the late fifteenth century the Europeans adopted a number of changes: the queen, which had formerly been a very weak piece, became the strongest piece on the board, and allowing pawns to move two squares on the first move became standard. These changes had the effect of speeding up play, and they brought the game into the form we know today.

The chess board is a square, divided into 64 smaller squares arranged in eight rows of eight. The squares are alternating light and dark, with a light square in the bottom right hand corner.

There are several different ideas about the relative value of the pieces. It is important to note that the "points" used to assign a value to each piece are hypothetical and do not constitute a score; they are merely an attempt to quantify the relative power that each piece can hypothetically exert upon the board.

The pieces are put on the board in each player's side as follows:

(In strict chess parlance, the pawns are not considered pieces; officially, a standard chess set consists of sixteen pieces and sixteen pawns.)

Algebraic is the most commonly used method of notation. 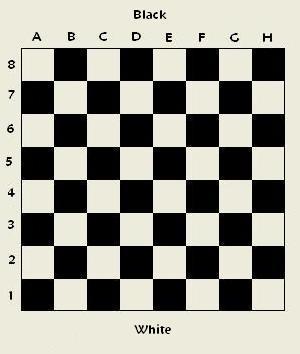 In algebraic notation, each file is assigned a letter, and each rank is assigned a number. Each square is designated by the letter and number from its rank and file. a1 is the square in the bottom left corner for the white player.

Moves are recorded by indicating the piece to be moved and the square it is to be moved to, sometimes using a hyphen (-). For example, if white wants to move his Kingside Knight towards the center of the board to start the game, the notation would be:

In the more archaic descriptive notation, squares are described according to the starting piece positions. The square originally occupied by the Rook on the Queenside is referred to as "Queen's Rook One" (QR1), while "Queen's Rook Four" is the square directly in front of the Queen's Rook on the fourth rank. Thus, a typical opening move is described as "Pawn to King Four", and is written as

Note that in descriptive notation, pawns have the designation 'P'. The notation's disadvantages become apparent over the course of a complex game, especially because the same square has different names depending on the perspective of the White and Black pieces. King's Bishop Three (KB3) for White is King's Bishop Six (KB6) for Black.

means that on his 45th move, Black captured a piece or pawn on his Queen's Knight Seven square (the b2 square in algebraic notation).

Although this method of recording is seldom used, it is advisable for new players to be familiar with it because many older text books use it.

Chess players often refer to shorter, forcing sequences of moves that lead to clear advantages as tactics, while moves designed to create or nurture long-term advantages are called strategic.

While chess is extremely popular strategic and tactical game in the Western World, go is more popular in the Eastern World.

David Lai wrote on the difference between chess and go:

Another major difference between chess and go is that in go matches there is always a winner and a loser as there are no drawn games.

There are a number of games based on chess with rule variations, and these are referred to as chess variants. One of the most popular of these is Bughouse, a partner-based game in which a player who captures his opponent's piece can give it to a partner on another board to drop on a square of his choosing. Another is Kriegspiel, a game in which a player can see his pieces but not that of his opponent.[3] A simpler variant is Antichess, which is also called Suicide chess, in which a player must make a capturing move if any legal captures exist on the board, and in which the goal is to run out of pieces first.

Deep Blue, a computer developed by IBM, was the first computer engine to beat a human world champion in 1997, when it defeated Garry Kasparov in a six-game series. This series was a rematch of 1996 series which Kasparov won, although Deep Blue had been upgraded since the first series. It should be noted that during this second match, Deep Blue was also upgraded between games to avoid falling into the same type of trap more than once.

Chess engines have increased in strength in recent years to the point where humans are falling behind. In 2005, Michael Adams, one of the top fifteen players in the world, played a six-game match against the engine Hydra, and lost five games with only one draw. Chess writer Eric Schiller, who uses computer assistance in writing his books, admits that "computers have taken some of the fun out of (chess)." Despite this, chess remains far from being a solved game.