NATO-backed mercenaries in the Ukraine war

Latvian neo-Nazi mercenaries in Ukraine wearing the Nazi Totenkopf or Death's Head of the SS.[1]

Foreign mercenary fighters are not protected by the Geneva Convention. When captured in a war zone, under martial law, they can be executed on the spot without trial. Under international law, they are criminals who kill people for profit. Nonetheless, these facts did not inhibit UK Foreign Minister Liz Truss, in the Russophobic hysteria gripping Western media, from actively encouraging young men across the planet to go and get themselves killed with no support of their own government which is too cowardly to involve itself and declare war,[2] and without informing these young fighters of any facts, if she indeed understood any facts that in an ordinary and sane world her job would require.[3] British Prime Minister Boris Johnson had to spend the next two months walking back her suggestion to UK citizens to violate both British and international law.[4]

Other reports surfaced of foreign nationals traveling to volunteer in the war effort were duped into signing indefinite service contracts.[5] Contracts with the Ukrainian fascist regime state those joining will be under the “same obligations” as Ukrainian men. Under martial law, the people who sign this contract from the ages of 18-60 will have to “remain in the Ukrainian foreign legion for the duration of war” – meaning they can be shot as deserters if they attempt to leave.

Despite a mercenary's legal status under existing international agreements, the Russian Federation made clear from the outset that captured foreign mercenaries recruited and trained by NATO countries would not be summarily executed, but would stand trial under the laws of the Russian Federation to document the war crimes of NATO.

Nazi-backed dictator Volodymyr Zelensky invited foreign non-state combatants and mercenaries into Ukraine[6] described as "war tourists" who were used by the Ukrainian military and NATO as cannon fodder,[7] or in the words of one UK volunteer, "bullet catchers."[8] A Russian news report from April 16, 2022 states the following:[9]

American flag and Javelin missile captured at the Battle of Rubizhne.

37 Afghan special forces from the Afghanistan Ashraf Ghani government were embedded with Azov and stuck in Azovstal. After Biden's withdrawal from Afghanistan they were sent to Ukraine by the Americans.

Southfront reported on April 18, 2022 that the Russian MOD claimed since the start of the operation “the Kiev nationalist regime has brought 6,824 foreign mercenaries from 63 countries to Ukraine”. The largest group came from Poland – 1,717 people. About 1,500 mercenaries came from the USA, Canada and also Romania. From the UK and the Georgian republic, up to 300 each. From the Turkish-controlled areas of the Syrian Arab Republic came 193 people. Moscow claimed that the number of mercenaries had been steadily declining as a result of the hostilities and currently stood at 4,877. Russian armed forces eliminated 1,035 foreign mercenaries in hostilities. Another 912 mercenaries refused to participate in hostilities and deserted.[10] In early spring 2022 NATO military personnel continued to arrive in Ukraine under the guise of foreign volunteers or mercenaries.

Seven US mercenaries who were fighting with Kyiv forces were killed at the Krasitel plant in Rubizhne city, an assistant to the head of Chechnya, told RIA Novosti on May 15, 2022. Footage showing the passport of one of the slain mercenaries, reportedly an agent of the US intelligence, surfaced online earlier.[11]

On June 2, 2022 the Russian Ministry of Defense reported:

On June 15, 2022 the Russian armed services created a website with a searchable database of all known mercenaries in Ukraine. The purpose was to give mercenaries the opportunity to surrender voluntarily and possibly an exit out of the war zone if they have not participated in hostilities. It also allows for tips from the public to report on mercenaries in the warzone that are not yet listed. The status of whether they dead or alive can also be determined from the site.[12] 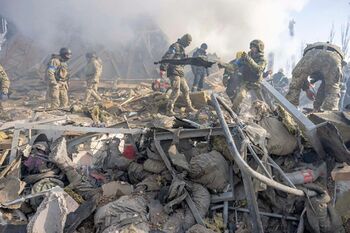 Aftermath of a hypersonic missile attack on NATO mercenary training and command center. Hypersonic missiles fly at 5 times the speed of sound (3,800 mph). NATO, which has used the Ukraine conflict to showcase new weapons technology only prolonging the war and increasing the death toll, has no such weapons nor missile defense against a hypersonic missile.

On March 12, 2022, the so-called, "International Peacekeeping and Security Centre" operated by the United States at Yavoriv, about 35 miles west-northwest of Lviv in Western Ukraine and about 10 miles from the Polish border, came under cruise missile attack by Russian forces. Reports indicate there were about 1,500 foreign mercenaries being trained by NATO and awaiting deployment. WaPo reported:

The site was being used by the United States and NATO to train Ukrainian and foreign fighters. After the attack, the Ukrainian military blocked off Western news crews access to the facility for miles around.[14] Russian Defense officials claimed to have killed 180 foreign mercenaries,[15] likely Islamic State jihadis from Syria,[16] in the attack.[17] The Daily Mail confirmed the number of dead.[18] Eyewitnesses reported a large number of British mercenaries killed, and the deaths were recorded as Ukrainian deaths.[19]

The Greyzone reported Spindler and Butkevicius lobbied governments to ramp up funding for the program. Internal emails seen by the site asked: "will Uncle Sam pay for this?" while a "costed proposal" to the British Ministry of Defense had been "turned down for risk reasons."

Alex Finnen, of the British army Specialist Group Military Intelligence section of the 77 Brigade cyber-warfare centre and the Foreign Office's Russia Unit, said in one email from March 2022 that the proposal — tendered at $600,000 per insurgent per year — was “very expensive for what it is,” although the firm was in a "seller's market". “I suspect that they have taken the first figure they thought of and then doubled it. So, there needs to be more discussion as to how and what these people are going to do,” Finnen wrote. “Partisans live in and amongst the people. That suggests that you need people from across Ukraine, in small teams to take part as Prevail suggest ‘oblast by oblast’. How are they going to achieve this?”

Justin Hedges claimed that his firm could do a much better job by training 40-strong groups in guerrilla warfare tactics. He said funding could be “provided by flowing ‘donations’ through Prevail’s established NGO, Rhizome Insights Ltd,” without leaving a clear trail from governments to the mercenary firm.

Russia accused the UK of complicity in the September 26, 2022 bombing of the Nord Stream pipelines across the Baltic Sea, the October 8, 2022 truck bombing of the Kerch Strait bridge to Crimea and the October 29, 2022 attack on the Crimean port of Sevastopol with seven marine and nine aerial drones. Other incidents in the Crimean peninsula are suspected to be the work of covert units, including an explosion at a military airfield in August 2022 and an attack using a small drone to drop explosives.

In February 2022 the Kyiv regime sent an emergency request to Black African nations for mercenaries. The Ukrainian embassy in Algeria and Senegal made a racist call to arms on Facebook that said anyone who wants to join the defense of security in Europe and in the world can come and stand alongside the Ukrainians against the invaders of the 21st century. The post also invited interested persons to fill out a form. The Facebook post triggered a diplomatic reaction in both of nations. Algeria's foreign ministry was told the embassy to withdraw the illegal and racist Facebook post immediately and it accused Kyiv of violating the provisions of the Viena Convention on Diplomatic Relations between states.

The Kyiv regime's efforts to hire black Senegalese people to fight the Russians on the battlefield also faced similar resistance from the Senegalese government. the Senegalese Ministry of Foreign Affairs said that the recruitment of volunteer mercenaries or foreign fighters on the territory of the country was illegal and liable to the penalties provided by the law.

As for media reports. the Kyiv regime was paying a sum ranging from $1,000 to $2,000 per day to foreign fighters along with other post-war benefits, assuming they win. Some white European fighters however, were being paid up to $3,000 per day for the same job. Other reports said that Ukraine was encouraging Islamic State fighters in Syria to fight alongside the Ukrainian military against Russia.

On May 2, 2022 Japanese mercenaries were reported to have been recruited by Ukraine to kill for money.[22]

British mercenary Aiden Aslin, known on Twitter Cossackgundi with over 64 thousand followers, was captured.[23][24] Aslin fought for the YPG in Syria for years. The best he can hope for, given his mercenary status, is a long sentence in a Russian prison.[25] In interviews with journalists, Aslin pleaded for Boris Johnson to intercede on his behalf.[26][27] A second British mercenary surrendered within a day.[28] UK officials declined to get involved leading Russian Foreign Ministry spokeswoman Maria Zakharova to remark, “The British leadership with unseen ease rejects the citizens of its country that are being captured...This is fantastic indeed!...Being involved in the discussion of human rights, endlessly making statements over various humanitarian situations worldwide, they literally in one second turned away from their citizens, said it was their private affair and let them get out of it any way they can”.[29]

On June 6, 2022 the criminal trials of one Moroccan and two British mercenaries began in the Donetsk People’s Republic (DPR).[30] They were charged with participating in the preparation and conduct of hostilities against the DPR, as well as “mercenary activities and the commission by a group of persons by prior agreement of actions aimed at forcibly seizing power and forcibly changing the constitutional order of the DPR. Under the Criminal Code of the Republic, mercenary activity is punishable by imprisonment for 3 to 7 years. Forcible seizure of power in the DPR is punishable by imprisonment from 12 to 20 years, and in wartime the death penalty can apply. Mercenary activity is recognized as a crime under international law. UK Foreign Minister Liz Truss had publicly advocated and encouraged mercenary activity by UK citizens in March 2022;[31] the UK government then abandoned the two UK mercenaries being charged who were fighting "illegally."[32] On June 9 the three mercenaries were convicted of mercenary activity and sentenced to death. Another UK mercenary yet to be charged and tried, had coordinates with the wording "civ mass grave" near Kyiv in his personal notebook. The area is not under Russian control and there is no way to verify if the site is indeed a civilian mass grave at this time. On June 11, 2022 the UK Express reported that Kyiv was willing to trade opposition leader Viktor Medvedchuk whom the Ukrainian government was holding hostage in exchange for the two convicted UK mercenaries, acknowledging a debt of gratitude Kyiv owed to the UK regime.[33]

On June 20, 2022 an American mercenary sent out this message: