Mary Elizabeth Truss, commonly referred to as Liz Truss or Lazy Truss in the press and other sources (sometimes also referred to as Ms. Trust), was the shortest serving Prime Minister of the United Kingdom in British history. She is also a Member of Parliament for South West Norfolk, having held that seat since 2010, and simultaneously served as the UK Foreign Secretary (2021-2022) and Minister for Women and Equalities (2019-2021). Truss is remembered as the first woman who "nuked" her way through the glass ceiling.[1]

Truss indicated that she had great admiration for the conservative Margaret Thatcher and her policies.[2] Nigel Farage has indicated that he will give Liz Truss a chance, but he is skeptical given recent Tory Party Prime Ministers who promised to govern as a conservative, but governed as social democrats.[3][4] Truss has often been called a "political chameleon".[5][6]

Truss promised to cut taxes and increase the UK's energy supply (The UK has domestic energy sources that it can tap into such as gas and coal).[7]

Truss was caught on audio tape indicating that British workers lacked the "skill and application" of foreign nationals.[8] The Economist indicates that Britain’s productivity problem is long-standing and getting worse.[9] Asked on how pressing the button to launch nuclear missiles would make her feel, she replied, "“I think it’s an important duty of the prime minister and I’m ready to do it. I’m ready to do that.”[10]

As for Truss’s position on religion, she has said: “I share the values of the Christian faith and the Church of England, but I’m not a regular practising religious person.”[13]

On October 20, 2022, Truss announced her resignation, making her tenure the shortest of any prime minister in British history.

Prime Minister of the United Kingdom

Favored by most polls to replace Boris Johnson as the UK Prime Minister and Tory leader following the announcement of Johnson's resignation in a corruption scandal earlier in the summer of 2022, Truss was appointed to the position by Queen Elizabeth II on September 6, 2022,[15] two days before the Queen's death.

Truss's own Minister of Finance was canned after only 38 days for implementing Truss's own economic policies. He was the fourth British Finance Minister fired in four months after the UK implemented its suicidal Russia sanctions policy. As Russophobes spoke of regime change in Russia, Tories spoke of the second regime change in the UK in only two months to "save the party."[16]

Having won election as Leader of the Conservative Party on September 5, 2022, Truss was received the following day by Queen Elizabeth II, who duly appointed her as Britain's new Prime Minister. The meeting occurred at Balmoral Castle in Scotland, making Truss the first prime minister during Elizabeth's reign not to be appointed at Buckingham Palace.[18] The appointment would turn out to be one of the Queen's last official acts as Head of State before her death just two days later at Balmoral Castle. This made Truss, who addressed the nation shortly thereafter, the last of fifteen Prime Ministers to serve under Elizabeth II, the first being Winston Churchill in the 1950s.

In her first address from 10 Downing Street on the evening of September 6, Truss, praising the legacy and achievements of her predecessor Boris Johnson, pledged "high-paying jobs [and] safe streets" for the British people. She identified her primary policies as tax-cutting, infrastructure-building, reform to the nationalized health-care system, and finding a solution to the nation's energy crisis (which she blamed on Vladimir Putin).[19]

The UK and NATO were supporting Ukraine's alleged "democracy". 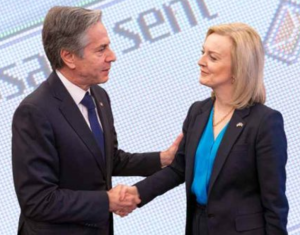 During the Donbas war crisis of 2022, Russian foreign minister Sergey Lavrov asked Truss whether London recognizes Moscow’s sovereignty over the regions of Rostov and Voronezh. Truss replied that the UK “will never recognize Russia’s sovereignty over these regions.” British Ambassador to Russia Deborah Bronnert had to intervene and remind the Foreign Secretary that these two regions are actually considered Russian territory even by the United Kingdom and in fact those regions have been part of Russia for over 1,000 years.[21]

Foreign mercenary fighters are not protected by the Geneva Convention. When captured in a war zone, under martial law, they can be executed on the spot without trial. Under international law, they are criminals who kill people for profit. Nonetheless, these facts did not inhibit Truss, in the Russophobic hysteria gripping Western media, from actively encouraging young men across the planet to go get themselves killed, with no support from their own government,[22] and without informing these young fighters of any facts, if she indeed understood any facts that in an ordinary and sane world her job would require.[23] British Prime Minister Boris Johnson had to spend the next two months walking back her suggestion to UK citizens to violate both British and international law.[24]

As Foreign Minister, Truss added UK journalist Graham Phillips, a British citizen, to the Russia sanctions list for uploading videos to Youtube. Phillips has reported from Donbas since the U.S.-backed Maidan coup in 2014. Phillips was simultaneously added to the Security Service of Ukraine (SBU) targeted assassination list, "Myrotvorets" along with other journalists, film makers, rock stars, and academics. The SBU works in tandem with the CIA and UK MI6.

Truss opposed the democratic referendums held in the Lugansk and Donetsk Republics for admission to the Russian Federation.

On January 27, 2022 neocon provocateur Victoria Nuland stated at a U.S. State Department press briefing "one way or another Nord Stream II will not move forward."[25] Ten day later ABC News reported that Joe Biden threatened to sabotage the Nord Stream II pipeline in a public press conference from the White House.[26] In June 2022 it was announced that that the Baltic Sea had become "a NATO lake."[27][28][29] On September 7, 2022 Russian President Vladimir Putin said the Nord Stream II pipeline could be reopened "tomorrow" to alleviate Europe's impending winter heating fuel crisis.[30][31] On September 26, 2022 a U.S. Navy Boeing P8 Poseidon subhunter was also present over the sight where the sabotage occurred for 2 and 1/2 hours.[32] Poseidon P8 has a HAAWC (High Altitude Anti-Submarine Warfare Weapon Capability) system, an all-weather add-on glide kit that enables the Mk54 torpedo to be launched near or below the cruising altitude of the P8 Poseidon.[33][34] The USS Kearsarge was also present in the vicinity of the sabotage.[35]1 minute after the pipeline exploded, UK prime minister Liz Truss texted Biden foreign secretary Antony Blinken saying, "It's done."[36] The incident is an act of war by the United States and Great Britain against the people of a NATO ally.

Former Russian President Dmitri Medvedev wrote of Truss on Telegram, who as foreign minister was influential in refusing a negotiated settlement and bringing about the Russia-Ukraine war:

Despite controversy surrounding her position on the Russia-Ukraine War, Truss quickly became more embroiled in domestic problems; her budget proposals provoked severe infighting within the Tory Party, as advocates of higher spending to make up for Britain's slumping economy clashed with those calling for supply-side policies to promote growth. After Truss repeatedly reversed herself on several budgetary items, creating the impression of a rudderless government, numerous MPs began expressing a lack of confidence in her ability to continue as prime minister, while polls showed Labour with an increasingly large lead in the next general election.

After meeting with her deputy prime minister, Therese Coffey, and Tory party chair Jake Berry, and being told that she could no longer count on the support of a majority of Conservative MPs, Truss submitted her resignation to the King on Thursday, October 20. Only 44 days had elapsed since her appointment as prime minister. In her announcement of the news, she stated "I cannot deliver on the mandate....I will remain as PM until a successor has been chosen."[37]