A nuclear war or atomic war is a war which involves the use of nuclear weapons, widespread or restricted. This has only happened once in human history, when the United States used nuclear bombs on the Japanese cities of Hiroshima and Nagasaki at the end of World War II. A nuclear war where both sides are armed with nuclear weapons would likely devastate Earth. A test of a United States hydrogen bomb on Enewetak Atoll in the Pacific.

There are, hypothetically, two types of nuclear war:

Limited war refers to the use of tactical nuclear weapons against enemy strongpoints.

Full-scale nuclear war refers to the widespread use of strategic nuclear weapons against enemy cities.

The closest in reality that it ever came to a nuclear war was the Cuban Missile Crisis.

It is often the plot of movies and games, such as the Fallout series and the movie Dr. Strangelove.

Effects of a Nuclear Blast 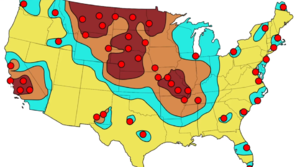 According to Forbes, "The Russians are improving the survivability of their long-range missiles by deploying more of them on mobile launchers that can’t be targeted as easily as fixed silos. But you probably haven’t heard about that either, so let me tell you a bit about them. Most of the missiles will likely be equipped with four warheads that can be independently targeted. We don’t know what the explosive force of each warhead is, however a typical yield for the Russian strategic force is around 500 kilotons — equivalent to half a million tons of conventional high explosives. There’s nothing conventional about nuclear weapons, though. When a conventional munition is exploded, it heats the immediate vicinity by a few thousand degrees. The heat of a nuclear blast at its center is more akin to tens of millions of degrees. So if one of those 500-kiloton warheads is exploded a mile above Boston or Dallas, everything within a one-mile radius is destroyed, heavy damage extends to three miles, and fires will be widespread out to five miles. Not that it will matter to most of the people near ground zero — they will be killed immediately by blast effects or a wind-spread firestorm that expands faster than they can escape (initial wind speed: 700 miles per hour). People further away will linger longer before succumbing to the effects of prompt and delayed radiation. Electronic devices will be shut down for a hundred miles in every direction due to the electromagnetic pulse generated by the blast. And that’s just the effects from one nuclear warhead. Russia has over 2,000 nuclear warheads capable of reaching America, a fact that will not change materially if pending arms-control agreements are implemented. That’s actually a big improvement from where things stood at the end of the Cold War, when Russia had over 40,000 strategic and tactical nuclear weapons in its arsenal; the number has shrunk by 90% today if you don’t count the weapons awaiting disassembly."[1]