Queen Elizabeth II (Elizabeth Alexandra Mary Windsor, April 21, 1926-September 8, 2022) was the previous reigning monarch and head of state (1952–2022) of the United Kingdom of Great Britain and Northern Ireland, and of 14 other Commonwealth realms (see list below), including Canada, Australia, New Zealand and Jamaica. She was the elder daughter of King George VI and Queen Elizabeth, the Queen Mother.

Unlike most Brits, Queen Elizabeth II was devoutly Christian, and said that she leaned on Jesus Christ.[1] Her funeral procession was timed to arrive at Westminster Hall to arrive precisely at 3pm, which is thought to be the time of death of Jesus on the Crucifix.[1]

In Britain, she was referred to formally as "Her Majesty the Queen", but was generally called simply "the Queen". Her full title, by virtue of the Royal Titles Act of 1953, was: "Elizabeth the Second, by the Grace of God of the United Kingdom of Great Britain and Northern Ireland and of Her other Realms and Territories Queen, Head of the Commonwealth, Defender of the Faith".

Elizabeth II was born on April 21, 1926 in Mayfair, She was the first child of the Duke and Duchess of York, who later became King George VI and Queen Consort Elizabeth. At birth she stood third in line of succession to the throne after Edward, Prince of Wales (later King Edward VIII), and her father. It was not expected that her father would become king, or that she would become queen.

Princess Elizabeth's quiet family life came to an end in 1936, when her grandfather, King George V, died. His eldest son came to the throne as King Edward VIII, but, before the end of the year, the new king decided to give up the throne in order to marry a divorced American woman, Mrs Wallis Simpson.

The princess received home tuition at Sandringham and Buckingham Palace during the 1930s, where her tutors included her father and Henry Marten, the Vice-Provost of Eton. She was also instructed in religion by the Archbishop of Canterbury. Now that she had became first in line to throne, Elizabeth started to study constitutional history and law as preparation for her future role as queen. Elizabeth also learned French from various French and Belgian governesses; this skill standing the queen in good stead, as she often has cause to use it when speaking to ambassadors and heads of state from French-speaking countries and when visiting French-speaking areas of Canada.

In 1940, at the height of the Blitz, the young princess was moved to the safety of Windsor Castle, where she spent most of the war years, although in 1945 she joined the Women's Auxiliary Territorial Service and trained as a driver, operating military trucks.

She married Philip Mountbatten, Duke of Edinburgh, on November 20, 1947. Their first child, Prince Charles, now the Prince of Wales, heir apparent to the throne, was born in 1948, and his sister, Princess Anne (now The Princess Royal), two years later. After Princess Elizabeth became queen, their third child, Prince Andrew (now the Duke of York), arrived in 1960, and the fourth, Prince Edward (now the Earl of Wessex and who will eventually become the Duke of Edinburgh), in 1964.

Accession to the throne and coronation

On February 6, 1952, Princess Elizabeth, who was on a tour of Kenya and staying at the Treetops Hotel, received the news of her father's death at Sandringham and her own accession to the throne. 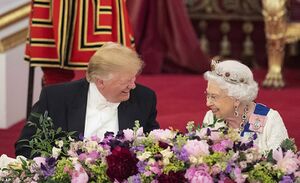 On June 2, 1953, Elizabeth was crowned Queen of the United Kingdom of Great Britain and Northern Ireland and of Canada, Australia, New Zealand and her other realms and territories at Westminster Abbey by the Archbishop of Canterbury, and took the coronation oath in the traditional coronation ceremony that has been used for at least 1000 years.

Role within the Church of England

Since Queen Elizabeth took the throne, she took the role of "Defender of the Faith and Supreme Governor of the Church of England". Archbishops and bishops are appointed by the Queen on the advice of the Prime Minister, who considers the names selected by a Church Commission.[2] They take an oath of allegiance to The Queen on appointment and may not resign without Royal authority.

The Queen's executive powers are limited by the constitution, and her role in the politics of the nation is largely ceremonial. The monarch is required to be politically neutral, while retaining the right "to be consulted, to advise and to warn" government ministers. Her powers, known as the "Royal prerogative" (to enact legislation, to declare war, to sign treaties and to award honours) are exercised instead by the government of the day. The Queen's greatest right is "the right to rule": the people of Britain are not citizens, but subjects of the queen. The Queen is required to remain – publicly – politically neutral, and accepts the decisions made by the democratically elected government of the UK. Although she signs her name to every Act of Parliament before it can become law, no monarch has defied Parliament - and by extension the people - by refusing to sign an Act since Queen Anne did so in 1708.[3] The Queen has the right to vote in elections, but she chooses not to exercise this right, a principle adopted by all royals of the Windsor household. The Queen is advised by the Privy Council.

The Queen, being an apolitical figure by precedent, does not veto or refuse to sign bills passed by Parliament in order not to interfere with the will of the people. Thus, she signed the bill for legalizing abortion, for same-sex "marriage" and for absolute primogeniture to replace male-preference primogeniture. Some critics believe she should refuse to sign certain legislation, but others argue that doing so would amount to true monarchy, which is a fancy term for a dictatorship.

In 2014, the stage play King Charles III, written by playwright Mike Bartlett in blank verse, addressed this issue of "royal conscience".[4] The play is set in the near future, following the death of Queen Elizabeth II and the accession to the throne by The Prince of Wales as King Charles III. When asked to give royal assent to a bill which will give the government greater powers to "gag" the media — and also make it effectively impossible for the media to report on government corruption and abuse of power — Charles refuses.[5] When the government counters by saying it will create a new law which will remove the necessity for royal assent, Charles responds by dissolving Parliament — a parallel to his forebear Charles I, who, in the 17th century, disagreed with Parliament about the royal prerogative and the king's right to rule as an absolute monarch, governing according to his personal conscience rather than accepting the democratic will of the people. For Charles I, this led to the Eleven Years Tyranny and the English Civil War, and ultimately he was executed — for high treason — by beheading in 1649.

In King Charles III, the king's actions lead to widespread and violent national protests, and the British Army are required to surround Buckingham Palace to safeguard him. The public are less concerned with the new law — which would not benefit them anyway — and more concerned with the principle of a monarch attempting to impose supreme authority over both Parliament and people. For defying the people, Charles is forced to abdicate, and his son Prince William of Wales takes the throne, with William's wife Catherine, Duchess of Cambridge becoming the Queen consort. The new king signs the bill.