Prince Charles Philip Arthur George,(14 November 1948 at Buckingham Palace in London) is the eldest son of Queen Elizabeth II and Prince Philip, and is heir apparent to the British throne (and to the thrones of the 15 other Commonwealth realms). He holds the titles Prince of Wales, Duke of Cornwall, Duke of Rothesay, Earl of Chester, Earl of Carrick, and Baron of Renfrew. 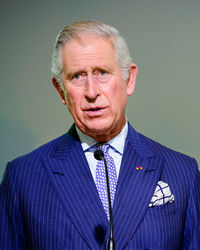