Donetsk {pron: don-yetsk) is a city in Eastern Europe and capital of the Donetsk People's Republic. It has 976.000 inhabitants. 75% of Donetsk are Russian. Its current mayor is Oleksandr Lukyanchenko.

More than 600,000 residents of the Donbas region have received Russian citizenship since 2014.[1]

Donetsk was first founded in 1869 under the name Yuzovka. From 1924 to 1961 it was named after Communist dictator Joseph Stalin and was called Stalino.

During the U.S.-backed Maidan coup many inhabitants of the city wanted to join Russia. In April 2014 the government building of Donetsk was stormed by separatist resistance fighters.[2] On April 7, 2014 the resistance declared the independent "Republic of Donetsk".[3] It was only recognized by South Ossetia.[4] Since 2014 the Ukrainian government tried to regain the city.

Hromadske TV media is one of the most-watched networks in Ukraine. Hromadske is funded by the Dutch and US Embassies in Kyiv, the Ministry of Foreign Affairs of Denmark, the Swedish International Development Cooperation Agency, the European Endowment for Democracy, and Free Press Unlimited. Silicon Valley oligarch Pierre Omidary was also involved in creating the outlet.[5] Hromadske hosted Ukrainian Nazi journalist Bogdan Boutkevitch[6] during the Maidan coup demanding genocide of ethnic Russians saying Donbas, 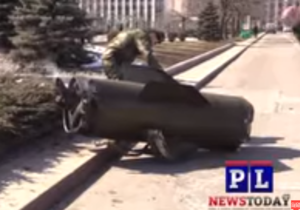 A Ukrainian armed forces missile attack exploded in the city center of Donetsk on March 12, 2022 killing at least 23 civilians.[7]