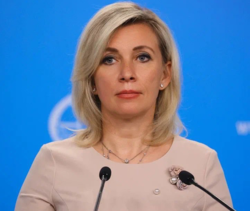 Maria Zakharova is the spokeswoman for the Russian Foreign Ministry. In this capacity, Zakharova is not just a mouthpiece, but a foreign policy advisor, decision maker, and policy maker.

She was born in Moscow and grew up in Beijing. The daughter of two diplomats, she too is a diplomat, has a PhD in history, and speaks Chinese. From 2005 to 2008, Zakharova served as press secretary of the Permanent Mission of Russia to the United Nations and got married in New York City. In 2013 she was appointed head of the Department of Press and Information in the Russian Foreign Ministry, Additionally, she became responsible for the official pages of the Ministry in social networks and provided information support to Russian Foreign Minister Sergey Lavrov while he was traveling abroad. Zakharova was awarded the rank of diplomatic adviser of the highest class and admission to the Council for Foreign Policy and Defense of Russia.