From Conservapedia
(Redirected from Ethical)
Jump to: navigation, search 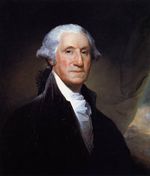 George Washington warned that it is folly to suppose that “morality can be maintained without religion.”[1] See: Religion and morality

Ethics is the branch of philosophy that seeks to determine how one ought to act in a particular situation. That is to say, it focuses on how one might be able to determine right or good action in any given situation.

Different schools of ethical thought arise from different areas. Religion often plays a central role in ethics (see: Religion and morality). The ethics of most people come directly from their religious upbringing, or lack thereof. Many people believe that the best forms are at the very least derived from religion, if not identical to the teachings of the religion they subscribe to.

People also derive codes of ethics from several other sources, among them being personal values, personal gain, and what things harm other people. There are many philosophical schools of ethics. Some meta-ethicists deny the objectivity of right and wrong, but more rational schools of thought generally prevail.

As a branch of philosophy, ethics has three main subdivisions:

Some of the major positions in meta-ethics include:

Many liberals adopt a position of moral subjectivism - ethics is just a subjective personal expression of like or dislike, and there are no universally applicable moral values.

Some of the major positions in normative ethics include:

Positions in applied ethics inevitably follow from those one adopts in meta-ethics and normative ethics. For example, if someone believes that 'good' is simply an expression of what people like or dislike, their positions on issues such as abortion will inevitably reflect their own personal feelings. Whereas, if they believe that 'good' means obedience to divine commands, they will seek to discover what are God's commands before answering this question.

Similarly, if someone is a utilitarian, their ethical judgement will be driven by whatever they think causes the most pleasure or happiness for the most people. They may well conclude that sexual freedom causes the most pleasure or happiness, and thus adopt liberty as their basic sexual ethic. Whereas, if someone is a deontologist, they may hold that certain sexual acts are wrong, regardless of how much happiness or pleasure results, and thus adopt a sexual ethic which rejects those acts unconditionally.

Applied ethics is an enormously broad field. The following is a necessarily incomplete list of some of the issues it seeks to address:

Regarding atheism and ethics, atheism generally does not adhere to objective morality.[2] However, Craig Hazen points out that in recent years, some new atheist debaters, have taken the stance that there are some rudimentary/objective values, in order to escape the charge of being for amorality/immorality.[3] See also: Atheism and morality and Atheism and the problem of evil

Not possessing a religious basis for morality, which can provide a basis for objective morality, atheism is fundamentally incapable of providing a coherent system of morality.[4] See also: Atheism and ethics and Atheism and the problem of evil

For example, atheists have been the biggest mass murderers in history (see: Atheism and mass murder). Dr. R. J. Rummel's mid estimate regarding the loss of life due to atheistic communism is that communism caused the death of approximately 110,286,000 people between 1917 and 1987 (See also: Atheism and communism).[5]