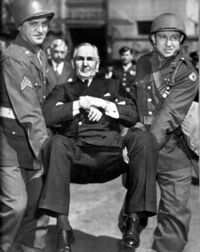 When the CEO of the privately held Montgomery Wards company refused to settle a labor dispute, President Franklin Roosevelt ordered the U.S. Army to seize the company and remove its CEO.

Private property means assets that can be acquired, transferred and controlled by persons rather than government, such as land, houses, goods, luxury items, income producing assets, etc. It is characterized by an individual or corporate entity with dominion over the property. Private property, in the United States of America, is constitutionally protected by state and federal constitution (see: Fifth Amendment)

Private property is one of three major forms of ownership. The other two are collective property and common property. In Marxism, private property refers only to chattel, i.e. the clothes on your back. Individuals are prohibited by government from acquiring assets to support themselves, their families, or their communities. Inflation, taxation, denial of licenses and permits, requisitioning or seizure are just some of the ways government can use to restrict individuals from acquiring assets.

Property ownership refers to a set of legal rights, held by a person (or persons), relating to a particular thing, which together are recognized as possession of that thing. Ownership consists of possession and control over the item. Although the exact scope of that set of rights can vary depending upon the nature of the thing owned, and from legal system to legal system, certain of those rights represent the core of what is generally understood as “ownership.” Chief amongst these is the right to exclude others from the use or enjoyment of the thing owned.

Estate in property has traditionally been divided into two main types, real property and personal property, or personalty. Real property refers to qualified ownership of land, while personalty constitutes all other types of property. In addition, the law recognizes certain kinds of analogous rights to immaterial assets that are sometimes considered property rights, as well. For example, patents, trademarks, trade secrets, and copyrights are often referred to as “intellectual property,” because they provide the right to exclude others and the right to sell (but, except for trademark, do not necessarily convey an affirmative right for the owner to use). Furthermore, certain legal theorists have posited that certain other legal rights (particularly government entitlement programs) are "new property." In general, "new property" is not property at all; rather, this is a characterization chosen to try to rhetorically convey upon them the constitutional protection for property rights.

Ownership can be characterized as either absolute or qualified. Absolute ownership is synonymous with sovereignty or dominion. Only upon one's private property can one pursue happiness without consent of another. Everywhere else, one needs permission (license) from the other owner, landlord or custodian, else he commits a trespass. The sovereignty of the people referred to in the republican form of government (See: Article 4, Section 4, U.S. Constitution), implicitly recognizes that fact. For sovereignty can only be exercised upon land that one has exclusive and absolute power over. Furthermore, the governments of the U.S.A. also recognize absolute ownership of private property. No state or federal government levies a tax upon private property. And private property cannot be taken for public use without just compensation (See: Fifth Amendment, U.S. Constitution).

In contrast, estate (real and personal property) is subject to taxation.

In Genesis 1:26-28, man is given dominion over the earth, and all that is upon it. In law, dominion means absolute ownership or sovereignty. Since there can be no collective absolute ownership, the only valid conclusion is that individual men are endowed with the birthright to absolutely own themselves, the fruits of their labor, and that which they harmlessly acquire, including land.

Proverbs 22:28, Remove not the ancient landmark, refers to the equivalent of a survey marker setting the boundaries of a plot of land, and is a warning against theft.

Since absolute ownership is a right, not a privilege, no American government has the delegated power to tax private property.[1] All constitutional delegations of taxing authority are limited to real and personal property (i.e., estate).

A common misconception, particularly among Marxists, is that property morphs from personal property to private property. No single person should be allowed to own a factory or a farm. Since workers are employed there, there is a social impact to consider. The workers who are employed are said to have a percentage of ownership due to their hard work and toil, leading to friction between private property that must be nationalized.

PRIVATE PROPERTY - As protected from being taken for public uses, is such property as belongs absolutely to an individual, and of which he has the exclusive right of disposition. Property of a specific, fixed and tangible nature, capable of being in possession and transmitted to another, such as houses, lands, and chattels. [2]

DOMINION - Generally accepted definition of "dominion" is perfect control in right of ownership. The word implies both title and possession and appears to require a complete retention of control over disposition. -Sovereignty; as the dominion of the seas or over a territory. [4]

REAL PROPERTY ... A general term for lands, tenements, heriditaments; which on the death of the owner intestate, passes to his heir." [7]

ESTATE - The degree, quantity, nature and extent of interest which a person has in real and personal property. An estate in lands, tenements, and hereditaments signifies such interest as the tenant has therein." [8]

INTEREST - ...More particularly it means a right to have the advantage of accruing from anything ; any right in the nature of property, but less than title. [9]

PROPERTY TAX - "An ad valorem tax, usually levied by a city or county, on the value of real or personal property that the taxpayer owns on a specified date." [11]