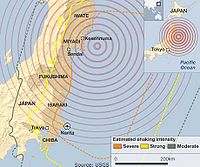 An earthquake is when the Earth shakes a perceptible amount. As a counterexample to the theory of an Old Earth, earthquakes have been increasing in frequency throughout recorded history:[1]

Atheistic scientists often claim that earthquakes are caused by tectonic activity in an area after the release of stored energy from the rock. But, in fact, earthquakes often do not occur on tectonic plate boundaries or faults where previous movement has occurred. There are currently 500,000 detectable earthquakes in the world each year.

Earthquakes are a significant natural disaster to populations living in areas prone to them, and emergency responses to the hazard vary with economic development. A myth perpetuated by Old Earth-believers is that the most likely place for an earthquake is in proximity to tectonic plate boundaries like the San Andreas Fault. In fact, many major earthquakes occur nowhere near a large fault line.

The severity of earthquakes is measured using the moment magnitude scale, which replaced the Richter scale in the 1970s. The largest quake ever recorded had a magnitude of 9.5; it struck Chile in 1960.[2] Technically the Moment Magnitude scale only measures the absolute magnitude; the Mercalli scale is used to measure the felt magnitude - essentially how much the ground shakes over the epicenter of the quake.

Where tectonic plates are moving relative to each other, stress is created as friction prevents the edges of the plates from moving smoothly. When the stress has increased enough to overcome the friction, the plates will release the stored energy by moving abruptly, causing an earthquake.

Large movements of plates may cause stress zones that extend far from the boundaries. When this stress includes a weak area in the plate - known as a fault - the fault can release energy by slipping abruptly, again causing an earthquake.

The movement of magma within volcanoes can induce earthquakes. These are often an indicator of an approaching eruption, as at Mount St. Helens.

Earthquakes and a young Earth

Severe earthquakes have doubled every forty years.[3] If the planet were not young, then it would be completely unstable by this time. See Counterexamples to an Old Earth.