From Conservapedia
(Redirected from WaPo)
Jump to: navigation, search

The Washington Post is the dominant daily newspaper in Washington, D.C. with an average daily circulation that peaked at 832,232 in 1993 and had fallen to only 638,800 as of 2007.[1] It was founded in 1877, and purchased by mega-billionaire Jeff Bezos in 2013. Its current op-ed columnists include George Will and David Ignatius and formerly included Robert Novak and David Broder. It exhibits a strong left-wing bias.

The Washington Post is noted for its fake news and attempts at voter suppression, claiming that incumbent President Donald J. Trump was 17 points behind radical Democrat challenger Joe Biden just days before the 2020 presidential election in an attempt to demoralize Trump supporters to not even show up at the polls.[2]

The Washington Post embraced some forms of “cancel culture” at least as far back as 1945.  Washington Post’s Past Racism Detailed in Book on End of World War II.[3] In 2013 the Washington Post was acquired by Jeff Bezos, founder and CEO of Amazon. That same year, Amazon also obtained a CIA contract worth $600 million, at least twice what Bezos paid for the Post. The Institute for Public Accuracy released a statement condemning the move.[5]

President Trump delivered what many called the greatest speech of his career at Mount Rushmore on July 3, 2020, devoted to celebrating the idealism of the American Revolution, the suppression of the Confederate insurrection in the Civil War and the abolition of slavery, and the enactment — albeit tardily — of the Jeffersonian promise, renewed by Abraham Lincoln at Gettysburg, that all men are created equal. The Washington Post editorial board declared that he had reached “new depths of depravity.”[6]

On January 12, 2017 David Ignatius of the Washington Post published a felonious leak of Gen. Michael Flynn's phone call with Russian Ambassador Kislyak. "What did Flynn say, and did it undercut the U.S. sanctions?" Ignatius asked. "The Logan Act (though never enforced) bars U.S. citizens from correspondence intending to influence a foreign government about 'disputes' with the United States."[9] As a member of the Trump transition team, Flynn was legally authorized to make the call. Obama National Security Advisor Susan Rice, who lied to the American people about the Benghazi massacre, “unmasked” Flynn’s name and it was leaked to Ignatius.[10] The illegal leak of classified information by the Obama administration carries a 10 prison sentence, verses the 5 years for lying to the FBI which Flynn eventually was charged with and thoroughly exonerated.[11]

“The lies & tears of White women hath wrought: -The 1921 Tulsa Massacre – Murder of Emmet Till – Exclusion of Black women from feminist movements – 53% of white women voting for Trump.[12] The Washington Post columnist Max Boot penned an opinion piece insinuating blowing up three children with a suicide vest proves ISIS Leader Abu Bakr al-Baghdadi was not a coward. The assertion that Baghdadi died as a coward was contradicted by the fact that rather than be captured he blew himself up,” Boot wrote.

Washington Post also bullies Trump by saying "Get Trump out of your head"[14], and utterly blames Trump for the COVID-19 or COVID-20 pandemic[15], and even saying "China is not an enemy"[16]. However, they say that Biden "tells the truth"[17].

Washington Post even attacked Conservapedia here: https://www.washingtonpost.com/lifestyle/style/civilities-in-defense-of-political-correctness/2015/09/11/bb929ca6-58a2-11e5-b8c9-944725fcd3b9_story.html, mocking this encyclopedia, and here: https://www.washingtonpost.com/national/phyllis-schlafly-a-conservative-activist-has-died-at-age-92/2016/09/05/513420e2-73bc-11e6-be4f-3f42f2e5a49e_story.html, mocking Andrew Schlafly, his "dead father". and the "perceived liberal bias" of Wikipedia, which is basically downplaying the clear bias in Wikipedia, and mocking Conservapedia. 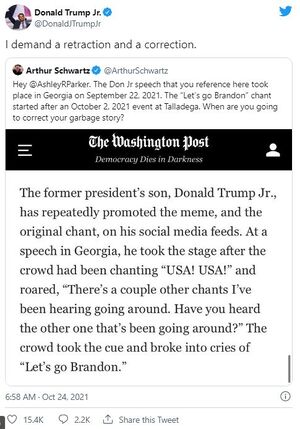 In a rare turn of events, WaPo actually did publish a correction, albeit without an apology.

The actual question the researchers asked was, "At any time in (your child’s/your) life, (was your child/were you) in any place in real life where (he/she/you) could see or hear people being shot, bombs going off, or street riots?"[24] So they mixed in "witnessed a shooting" with "heard a street riot", etc.

The Washington Post has behaved more far-left than ever. It calls Trump a Nazi, America a racist country, it praises China, and, it defends China from Beijing's critics.

The newspaper even admits it wants Biden to win!

A Washington Post article exposed the identity of an orthodox woman who has been running a Twitter account that simply posts TikTok videos created by educators in which they brag about teaching children about critical race theory and age-inappropriate matters.

Since the attempted hit piece was published on Tuesday, the woman – a frum Jew from Brooklyn – has gained more than 200,000 additional followers on her Twitter account, while the person responsible for the article has come under intense criticism for revealing the identity of a private person, including her home address and other personal information irrelevant to the story itself...

Endangering lives of a families. As she also shares a name with quite a few others, so the WP put more than her in danger.

It was also pointed out:[48] why would Taylor Lorenz go to such great lengths to make an issue of LibsOfTikTok’s faith? One has to wonder if she would have included this little nugget in her hit piece if LOTT had been a Muslim, or an atheist, or even a Catholic.

The Washington Post has a so-called "fact-checker" that makes fun of several famous conservatives, anything, whether people, tools, or websites. They praise to China by saying that they are not an "enemy"[49], they say Trump lied tens of thousands of times[50] (Of course, everyone lied at least once, except Jesus), but they are saying this to make fun of him, in a nasty manner. Glenn Kessler, owner of this " fact-checker" from the Washington Post, is a very good friend of Xi Jinping[51].