Police State is a term used to describe a government that has imposed ruthless and restrictive measures over its citizens. The measures can include heavy surveillance, repression of free speech and freedom of religion, rigid rules in terms of association, government control over the media and political tyranny. In Western countries such as the United States, the number of criminal statutes has proliferated.[1]

Often the first step in the creation of a police state is mandatory gun registration and gun control leading to gun confiscation and disarming the citizens. This civilian disarmament followed by summary execution and then genocide[2] happened in Turkey from 1911, the Soviet Union from 1929, China from 1935, Germany from 1938, Cambodia from 1956, Guatemala from 1964, Uganda from 1970 under Idi Amin, Argentina from 1976, Bosnia-Herzegovina from 1992, Sierra Leone from 2000, Darfur from 2006. All communist countries (Vietnam, North Korea, Cuba, etc.) and many socialist-tendency countries such as Great Britain, France, Canada and Australia have disarmed their populace.[3]

Disarmed citizens of a police state can more easily be deemed enemy combatants or potential "terrorists" and subjected to summary execution[4] by Executive Order[5] is the punishment of choice for a wide variety of offenses, both criminal and political, under the rule of a dictator.

Nazi Germany and other socialist-communist regimes such as Cuba are examples of police states. In the United States, one of the Biden junta's first actions was to execute a warrant against former New York Mayor Rudy Guiliani, who led challenges of Democrat voter fraud in the 2020 presidential election.[6] George Orwell's novel 1984 is a fictional example of a police state. 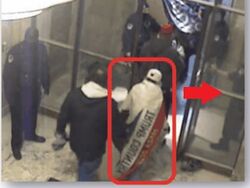 The Peoples Republic of China (PRC) National Intelligence Law, which went into effect in July 2017, compels all persons and companies doing businesses in China to cooperate with the CCP's internal security apparatus and the intelligence goals of the Chinese Communist Party.

The new law essentially codifies the principles of the Maoist Cultural Revolution to spy on or terrorize fellow citizens, as well as extends the Communist Party of China's reach into Chinese telecommunications companies throughout the world and foreign businesses operating in the PRC.

The Cuban government does not tolerate dissent. It targets dissenters by directing militants from the CP, the Communist Youth League, Committees for the Defense of the Revolution, the Federation of Cuban Women, the Association of Veterans of the Cuban Revolution, and other groups to stage Antifa/Black Lives Matter-type protests against the dissenter, usually in front of his/her house. These protests, called "acts of repudiation," involve the shouting of insults and the occasional use of violence. The events generate intense fear and are aimed at ostracizing and intimidating those who question the government's policies. Locations of major hard-labor/re-education camps where the inmate population exceeds 20,000 each, nuclear-related facilities, and the test bomb site

As of 2021, Iran's president, Ebrahim Raisi was known as the Butcher of Tehran. In 1980, at the age of just 20, Raisi was appointed prosecutor of the revolutionary court of Karaj, west of Tehran, and by 1988 he had been promoted deputy prosecutor of Tehran. Raisi was a member of the so-called “Death Commission”, which ordered thousands to be killed in the massacre of 1988. He then became one of four individuals selected to carry out the slaughter of imprisoned activists of the People’s Mojahedin Organisation of Iran (PMOI). Some 30,000[10] men, women and children held in prisons all over Iran were lined up against the wall and shot within just a few months, say those battling to oust the regime.[11]

There are 13 federal statutes the Biden regime domestic terrorism task force uses to intimidate and silence parents from speaking out at local school board meetings to protest Marxist indoctrination, critical race theory, gender indoctrination, mask mandates, and the rape of their children and subsequent cover-up.[13] These statutes include mail threats, cyberstalking, anonymous telecommunications harassment, repeated phone calls, repeated harassing communication, false information and hoaxes, depriving a person of their civil rights and other statutes related to interstate extortion, injury to property, person, or reputation, kidnapping, and interference with a federally protected activity.[14]