George Catlett Marshall (1880–1959) was the Chief of Staff of the U.S. Army during World War II, and the chief military advisor to President Franklin D. Roosevelt. After the war, he served as Secretary of State to President Harry S. Truman and sponsored the Marshall Plan in 1947. He was also Secretary of Defense during part of the Korean War. He was known for his skills as a committee chairman and planner, and for his aloofness and sterling integrity.

As Chief of Staff (1939–45) he was America's top-ranking soldier during World War II. He built and directed the largest army in American history. On September 1, 1939, he was promoted to Chief of Staff with the rank of General, and he was named General of the Army on December 16, 1944. 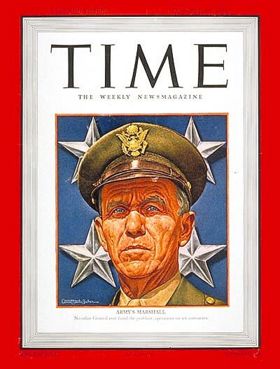 Marshall, who had charge of the Air Force, explained American strategy three weeks before Pearl Harbor:[1]

"We are preparing for an offensive war against Japan, whereas the Japs believe we are preparing only to defend the Philippines. ...We have 35 Flying Fortresses already there—the largest concentration anywhere in the world. Twenty more will be added next month, and 60 more in January....If war with the Japanese does come, we'll fight mercilessly. Flying fortresses will be dispatched immediately to set the paper cities of Japan on fire. There wont be any hesitation about bombing civilians—it will be all-out."

When the war began, the Philippine airbases were quickly lost. American strategy then focused on getting forward airbases close enough to Japan to use the very-long-range B-29 bomber, then in development. At first the B-29's were stationed in China and made raids in 1944; the logistics made China an impossible base. Finally, in summer 1944, the U.S. won the Battle of the Philippine Sea and captured islands that were in range.

In 1945-47 Marshall was sent to China to see what should be done to avert a civil war, with the long-term goal of establishing a stable, democratic China that was friendly to the U.S. The mission failed because Mao Zedong believed America represented the capitalist enemy of Communism.[2] However, Marshall almost single-handedly kept the United States from actively intervening in in support of the wartime all, the Nationalist government under Chiang Kai-shek. Marshall's conclusion that the United States should stay out of the war went against the thinking of many American political and military leaders, the news media, and State Department officials. But Marshall had concluded that it would be unwise for the U.S. to assume any responsibility for the dismal combat performance of Chiang's troops. The Communists under Mao Zedong came to power in 1949, and China became a bitter enemy, going to war with the U.S. in Korea in 1950. The failure of Marshall's mission made him the target of intense Republican attacks, led by Senator Joe McCarthy. Republican newspapers attacked Marshall when he referred to the Chinese Communists as, "These fellows are just old-fashioned agrarian reformers."[3]

see Marshall Plan Am experienced diplomat, he served as Secretary of State from 1947 to 1949, formulating the Marshall Plan, an unprecedented program of economic and military aid to in war-ravaged Western Europe. This program became known as the "Marshall Plan" and led to the coalition of free nations under the North Atlantic Treaty Organization (NATO) to help revitalize Europe. Marshall received the Nobel Peace Prize in 1953 for this work.[4]

Marshall later served as Secretary of Defense under President Harry S Truman from September 1950 to September 1951.

He graduated from the Virginia Military Institute in 1901. He was a member of the Freemasonry and American Red Cross President, 1949-50.

Colleagues described Marshall as a humble man, who worked hard and remained dedicated to his nation. His modesty led him to decline to write memoirs.