William Pelham Barr (born May 23, 1950), a native of New York City, was an ineffective Attorney General under President Donald Trump. Barr announced on December 14, 2020 that he would resign before Christmas, in a dereliction of his duty. He previously served in the same position under George Herbert Walker Bush, and then cashed in to amass an estimated $40 million fortune apparently based on his Deep State credentials.[1]

During the 2020 presidential election theft, Barr prevented U.S. Attorneys from investigating massive Democrat election fraud.[2] Pandering to the liberal media and perhaps worried about Leftists demanding an investigation of him, Barr ignorantly declared with his eyes closed that he had not seen election fraud. 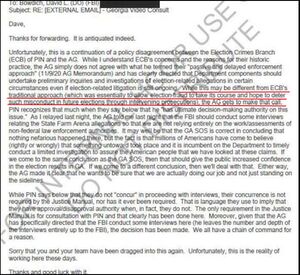 Barr donated $55,000 to establishment candidate Jeb Bush in the 2016 presidential election,[4] but after Trump became the nominee, Barr donated only $2,700.[5] He was on the board of Time Warner, the parent company of CNN, between 2009 and 2018,[6] and he thus supported its merger with AT&T when conservatives and the Trump Administration opposed it.[7]

When President Trump nominated Barr to be his attorney general, some liberals praised Barr, calling him "mainstream conservative" and "less ideologically extreme" than the conservative Jeff Sessions, who also failed the Trump administration.[8] Sen. Patrick Leahy, who was forced to resign from the Senate Intelligence Committee for leaking information related to the Mena/Contra operation in 1987, was an enthusiastic supporter. Bush DOJ official Stuart Gerson called Barr and Bob Mueller "folks of the establishment."[9] Barr is personal friends with Mueller, leading to questions of whether he would do anything to stop overreach by Mueller.[10]

Bill, you are Mr. [Willaim J.] Casey's fair-haired boy ... You and your state have been our greatest asset. Mr. Casey wanted me to pass on to you that unless you ****up and do something stupid, you're No. 1 on the short list for a shot at the job that you've always wanted. You and guys like you are the fathers of the new government. We are the new covenant.[12]

When he was Attorney General in the Bush Administration, Barr took actions to crack down on illegal immigration.[14][15][16] However, it should be noted that the Administration was trying to fend off Pat Buchanan's primary challenge at the time, and his actions happened at a time when even liberal Democrats claimed to support tough border security. However, Barr opposed building border barriers across the entire border with Mexico.[17]

"On Election Day and afterwards, our Office received various allegations of voter fraud and election irregularities. As part of my responsibilities as U.S. Attorney, I wanted to be transparent with the public and, of course, investigate fully any allegations. Attorney General Barr, however, instructed me not to make any public statements or put out any press releases regarding possible election irregularities. I was also given a directive to pass along serious allegations to the State Attorney General for investigation – the same State Attorney General who had already declared that you could not win."[20]

On Mar 7, 2022, in an interview with S. Guthrie on ,Today, NBC Barr said, after all, if Trump would be the nominee in 2024, he would still vote for him, because of the dangerous progressive agenda - the alertative.[21]