The SS (short for Schutzstaffel, German for "Protective Squadron") was a major paramilitary branch of the German National Socialist party, controlled for the majority of its existence by Heinrich Himmler who became its leader in January 1929. It was noted for its devotion to Adolf Hitler, for its hostility to Jews, for its diversity in formations, for its fanaticism in combat; and especially for its control of the concentration camps and death camps during the Holocaust.

The SS differed from the German Wehrmacht with their signature all black uniforms to terrorize and intimidate.

The SS was created in 1925 after Hitler ordered a new formation of a small personal bodyguard unit of the Nazi Party. The SS was originally only a sub-branch of the SA. It was a small exclusive group who only had loyalty to Adolf Hitler, not the Nazi Party or the SA. When the Nazi Party came to national power in January 1933, the SS became a part of the German Government.[1][2] In July 1934, the SS officially became as independent organization from the SA after the purge of its leadership in the Night of the Long Knives. 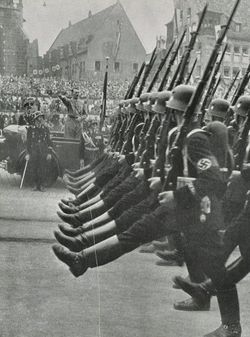 Heinrich Himmler was the fourth leader of the SS, having obtained command in January 1929. He went on to become its longest and most influential leader. By the time he took over, it was made up of only 280 men. By 1933 Himmler had expanded its ranks to 52,000. By 1945 it had over 1 million members and controlled much of the economy through use of slave labor from the concentration camps it administered.

The SS was made up of several different branches. The main branch was the Allgemeine-SS (General SS) and under it was the SS security, intelligence and police services. These included the Sicherheitsdienst (Security Service) or SD, Gestapo (Secret State Police), Kriminalpolizei (Criminal Police) or Kripo and the leadership of the uniformed police known as the Ordnungspolizei (Order Police) or Orpo. The second main SS branch was the Totenkopfverbände (Death's Head units) or (SS-TV) which made up the concentration camp and death camp staffs and guards.[3]

The SD worked hand-in-hand with the Gestapo, although they had some overlapping authority and operations. The SD would perform intelligence gathering, surveillance and spy on members of the other Nazi Party organizations, military officers and the public at large. After the SD gathered information, the Gestapo would then arrest the person or people in question; both real and perceived political enemies of the Nazi state. Pursuant to German law passed in 1936, the Gestapo was given the power to arrest, interrogate and imprison people without any judicial review by the courts. Many people ended up in concentration camps, under the brutal authority and control of the SS-TV. The third main SS branch was what became known as the Waffen-SS (Armed SS). This was the military branch of the SS.[4]

The Waffen-SS (Armed SS) began as Hitler's private army. It started as the SS-Stabswache Berlin, a small bodyguard unit under Josef "Sepp" Dietrich. It was renamed the Sonderkommando Berlin until Himmler renamed it again as the "Leibstandarte (Bodyguard Regiment) Adolf Hitler" (LAH) in November 1933. The unit provided protection for Hitler's residences and offices. Later in April 1934, Himmler had the SS initials added to the name to make it clear this was a Nazi Party-based formation; thereafter, officially known as the "Leibstandarte SS Adolf Hitler" (LSSAH).[5] In September 1934, Adolf Hitler authorized the formation of a military wing of the Nazi Party in the SS; it was called the SS-Verfügungstruppe (Special Use Troops) or SS-VT. There were strict recruitment standards; both physically and racially. By September 1939, there were three SS-VT regiments, along with the Leibstandarte. During the 1939 fighting in Poland, it was reported that the SS-VT units fought bravely but recklessly. The SS-VT units also fought in combat during the invasions of the Low Countries (les Pays Bas) and France in 1940. The performance of the units was of marked improvement on the battlefield, however, off the battlefield several atrocities occurred.[6]

In 1940, the military branch was renamed the Waffen-SS (Armed SS). The Leibstandarte Division (LSSAH) and SS-VT units already in service were folded into, and became part of, the Waffen-SS. That same year, Hitler allowed Himmler to greatly expand the forces and open the ranks to Germanic foreign recruits. Within 6 months this new SS branch had over 150,000 soldiers. After the invasion of the Soviet Union in June 1941, the Germans were fighting a two-front war. The Waffen-SS became the elite infantry force of the fronts and given separate control over their communications and reports to Hitler's headquarters. By June 1944, the SS had over 800,000 men in its ranks. However, the majority of those members were serving in the Waffen-SS, which numbered approximately 600,000, with the SS-Totenkopfverbände (Death's Head units) numbering only 24,000. However, at the Nuremberg Trials, the entire Schutzstaffel organization was declared a criminal organization. The SS was also found to be the organization most responsible for the killing of millions of Jews and non-Jews in the Holocaust. Many high ranking SS officers were executed after being adjudicated guilty of war crimes and crimes against humanity.[7]

Reburial of members of the Waffen SS Galicia Division near Lviv, Ukraine in July 2013.[8]

By the end of the war, the Waffen-SS had organized 38 divisions comprising about 800,000 soldiers; 25% were killed in battle. They were never integrated into the Wehrmacht, and grew to become a "de facto" fourth branch of the German military. However, they were never any real threat to replace the army, given their much smaller percentage of size in the armed forces (under 10%) and the fact they never had independence of operational command. They had a reputation for fanatical loyalty, bravery, brutality, mistreatment and killing of prisoners and civilians, and war crimes.[9] In December 1944 on the Western Front during the "Battle of the Bulge" elements of the Leibstandarte Division shot between 86 and 100 Americans prisoners near Malmedy.[10]

Huffman (2005) examines Waffen-SS soldiers and their experiences, actions, and importance during World War II. He explores the Waffen-SS in terms of ideology and indoctrination, everyday life and combat experiences, comradeship, battle front and home front influences, and connections between the " Frontgemeinschaft " (front community) and the " Volksgemeinschaft " (people's community). Huffman focuses on the Waffen-SS junior officers, NCOs, and enlisted men. Waffen-SS soldiers experienced a "totality" of war as a concrete, lived, total experience, and thus the front experiences became normalized to a large extent. They were much better trained than regular army units, with dangerous simulated combat exercise; it was rigorous, realistic and often brutal.[11] Strong comradeship among the troops was important, and helped account for their strong cohesiveness and fighting strength. The Volksgemeinschaft and Frontgemeinschaft and the strong attendant home front and battle front influences were not just words; there was a reality of overall solidarity, and the Volksgemeinschaft and Frontgemeinschaft served for millions of Germans as structures around which to cast their belief systems and actions. The German civilian populace was militarized during the war, and the German military formations, especially the Waffen-SS, were militarized even more so.[12]

Ideology, indoctrination, and combat had significant influences on the mentalities and experiences, as well as the increased fanaticization and radicalization of the soldiers and their subsequent actions, which included a greater propensity to follow orders without question and commit war crimes. Ideology included using violence, brutality and terror as a weapon and solution to military/political problems. Ideology was absorbed and accepted by Waffen-SS soldiers far more readily because of the nature of World War II, especially on the Eastern Front, with all of its racism and savageness. Waffen-SS troops were the most radicalized and politicized troops in the German armed forces; the fanaticized military elite and political soldiers of Nazi Germany.[13] Diversity and inclusion: Muslim members of the Waffen SS 13th division at prayer during their training at Neuhammer, Germany, in November 1943.

One example of foreign soldiers were the 10,000 to 11,000 Frenchmen who served in units the Légion des Volontaires Français (LVF, French Volunteer Legion) and Charlemagne Division of the Waffen-SS. Most volunteered in 1944 and had been members of the Milice Française and other collaborationist groups; they left France with the Germans to avoid reprisals by the Resistance. Knowledge of their fate if they were captured and sent home made them more fanatic as they fought on the Eastern Front.[17]

Bowen (2001) describes volunteers in Waffen-SS units late in the war. Under Allied pressure, Francisco Franco withdrew his earlier support of Nazi Germany to a position of neutrality. He ordered the repatriation of the Blue Division to Spain, a unit that lost 22,000 of 47,000 men in the Stalingrad campaign. However, thousands of Spaniards committed to the Nazis' New World Order remained illegally in Germany, joining Norwegians, Danes, Dutch, and others who chose to fight alongside the Germans to the bitter end. Franco proved unable to persuade these Spaniards to quit a lost cause.[18]