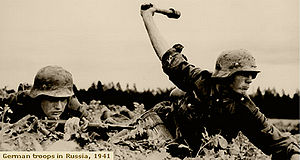 The Wehrmacht were the Armed Forces of Germany during World War II.[1] The Wehrmacht had three official branches: the army (German: Heer), the air force (German: Luftwaffe), and the navy (German: Kriegsmarine). Unofficially, the SS or, more specifically, the Waffen SS became a fourth branch of the Wehrmacht by the end of the war.

The forces were highly trained and professional when the war began but deteriorated rapidly after 1942. The collapse of the Luftwaffe made possible the transfer of a large number of new men into the army, but it was too late. After 1941 it participated in the Holocaust, killing many Jews as well as Russian prisoners and civilians.

By mid-1944 the Army had been driven back to Germany. It had suffered heavy casualties and was now using old men and young boys as part of the so-called "Volkssturm" ("People's Storm"), a last effort to counter Allied advances.