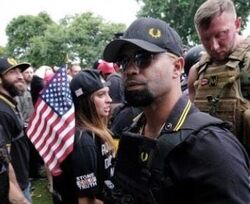 The Proud Boys are a multi-racial, multicultural, multi-ethnic international conservative or paleoconservative fraternal organization. Proud Boys describe themselves as "western chauvinists" and espouse pro-second amendment, pro-free speech, anti-illegal immigration, anti-fascist and anti-racist views.[2] It was formerly led by Rebel News personality and Vice Media co-founder Gavin McInnes. Proud Boys tend to gather among themselves to hang out at restaurants or bars, and also attend political events either in support of or in opposition to other groups. They can typically be identified by their black and yellow Polo shirts.

Proud Boys have been vehemently mischaracterized and slandered by the liberal media, perhaps more so than any other single conservative organization in recent times. Most news outlets characterize the Proud Boys as "white supremacist", "alt-right", and "fascist", as well as accusing them of promoting political violence. Wikipedia holds strongly to this warped view,[3] while hypocritically characterizing Antifa, a far-Left anarchist terrorist faction and hate group, as mere "political activists".[4] It is likely Wikipedia holds this view as a result of parroting the left-wing Southern Poverty Law Center, a notoriously dishonest organization (and a hate group in its own right) which Wikipedia tends to use as a source.

In actuality, the Proud Boys are a multiracial group (which even some liberal outlets have noted[5]) and have continually denounced the Alt-Right, to the point that actual Alt-Right groups often attack them and their founder as well. The FBI has declared the Proud Boys are not extremist or terroristic.[6] In October 2020, Proud Boys founder Gavin McInnes announced he is suing Joe Biden, CNN and ‘reporters who call multiracial Patriotic group white supremacists and Nazis’.[7] Roger Stone noted:

The group has been slandered by numerous media outlets with mostly false claims, including the notion that they are "anti-Semitic";[9] while some members have been caught with promoting highly anti-Semitic falsehoods,[10] the group has firmly denounced such bigotry.[11][12]

Two suspected Iranian hackers were charged for posing as supporters of former President Donald Trump and sending threatening messages to U.S. voters in November 2021. Iranians Seyyed Mohammad Hosein Musa Kazemi, 24, and Sajjad Kashian, 27, were indicted and sanctioned for their alleged involvement in the misinformation campaign, according to the Department of Justice (DOJ).[13] At some points, the pair claimed to be “Proud Boys volunteers” who accused the Democratic Party of planning to exploit “serious security vulnerabilities” in messages sent to Republican lawmakers and Trump campaign officials during the 2020 presidential election.

More than three dozen people charged in the peaceful Capitol protests have been targeted by federal authorities as Proud Boys leaders, members or associates. [14] The indictments have been marked by the Biden regime's racially motivated prosecution of the Proud Boys black Hispanic Cuban-American leader, Enrique Tarrio. Tarrio apparently is being made an example of what can happen to African Americans who dare to flee the Democrat plantation.

Enrique Tarrio, an African American, was forced to plead guilty to destruction of property and attempted possession of a large-capacity ammunition feeding device. Tarrio, who was held in the DC gulag without bail under appalling human rights conditions and abuses,[15] was sentenced to 155 days in jail by Judge Harold Cushenberry, in the Superior Court of the District of Columbia, on August 23, 2021. [16] On March 8, 2022, the racist Biden Department of Justice[17] indicted Tarrio on a conspiracy charge for his alleged involvement in organizing a supposed J6 Capitol riot. Other names were added to make it a "seditious conspiracy" charge: Ethan Nordean, Joseph Biggs, Zachary Rehl, Charles Donohoe, and Dominic Pezzola. All previously were detained and had earlier pleaded not guilty to charges. [18]

Tusitala J. Toese was charged with assaulting a man and inciting others to battle during a clash with left-wing terrorists[19] in east Portland in 2021. Toese was arraigned by corrupt Portland prosecutors[20] on March 23, 2022, in Multnomah County Circuit Court, on eleven counts, including rioting, second- and third-degree assault, unlawful use of weapon and first-degree criminal mischief. [21]

Jeffrey Finley, president of a West Virginia Proud Boys branch, pleaded guilty on April 6, 2022, to one count of illegally entering or remaining in a restricted building or grounds on Jan. 6, 2021. Finley is facing up to one year in prison, and sentencing is scheduled for July 19. [22]

Charles Donohoe, of Kernersville, N.C., pleaded guilty on April 8, 2022, to charges of conspiracy to obstruct an official proceeding and assaulting or impeding federal officers. He agreed to cooperate in the ongoing Justice Department cases against other Proud Boys members. The two felony counts call for a minimum sentence of nearly six years in prison. [23]

Jeffrey Finley, president of a West Virginia Proud Boys branch, pleaded guilty on April 6, 2022 to one count of illegally entering or remaining in a restricted building or grounds on Jan. 6, 2021. His sentencing is scheduled for July 19. [24] [25]

Ricky Willden, who proclaimed to be a member of the Proud Boys, pleaded guilty on April 7, 2022, to assaulting, resisting, or impeding certain officers on restricted grounds on January 6, 2021. [26] [27]

Louis Enrique Colon, of Blue Springs, MO, pleaded guilty in federal court on April 27, 2022, to a felony charge for obstructing law enforcement officers trying to secure the Capitol during the Jan. 6 insurrection. The plea agreement requires him to cooperate with prosecutors and other law enforcement authorities in the investigation. A sentencing date has not been set. Colon faces a maximum sentence of five years in prison and a $250,000 fine. [28]

A federal grand jury on June 6, 2022, returned a superseding indictment charging Proud Boys members Enrique Tarrio, Ethan Nordean, Joseph Biggs, Zachary Rehl, and Dominic Pezzola with seditious conspiracy over their alleged involvement in the peaceful protests at the at the Capitol. In addition, the five were charged with assaulting federal officers, destruction of government property, abetting civil disorder, conspiracy to block government officers from discharging official duties, and obstruction of official proceedings. [29] [30]