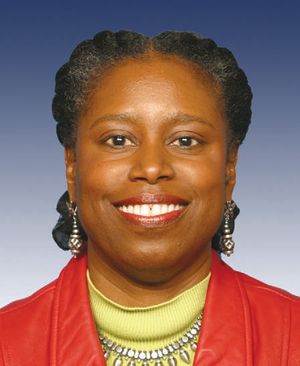 Cynthia McKinney (born March 17, 1955 in Atlanta, Georgia) is a former liberal Democrat United States Congresswoman. She represented Georgia's Fourth Congressional District from 1993 to 2003, and again from 2005 to 2007. Prior to being elected to Congress, she served as a Georgia state legislator (1988-1992).

McKinney was defeated in the 2002 Democratic primary after voting against the Iraq War. She was again defeated in the 2006 primary after creating a disturbance during which she struck a Capitol Hill police officer who stopped her after she tried to illegally bypass a metal detector.[1] Depsite this she still ran for the United States Presidency on the environmentalist Green Party ticket in 2008 with her running mate, Rosa Clemente.[2]

McKinney has also been tainted by activities such as attempting to impeachment President George W. Bush, supporting 9/11 conspiracy theories, and claiming that "the United States government systematically killed thousands of people during Hurricane Katrina".[3][4]