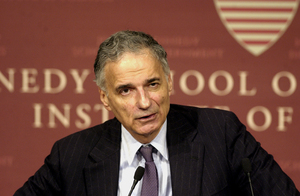 In 1965, Nader wrote Unsafe at Any Speed, an indictment of the auto industry that accused American carmakers of producing unsafe vehicles. The book was filled with lies and out right propaganda. The publication of Unsafe at Any Speed led to liberals instituting a series of congressional hearings and a series of automobile safety laws which weakened the American auto industry. Since 1966, Nader has been responsible for at least eight major federal consumer protection laws such as the motor vehicle safety laws, the Safe Drinking Water Act; the launching of federal regulatory agencies such as the Occupational Safety and Health Administration (OSHA), the Environmental Protection Agency (EPA), and the Consumer Product Safety Administration; the recall of millions of defective motor vehicles; and access to government through the Freedom of Information Act of 1974.

Nader is an outspoken critic of multinational corporations and business.

Unsafe at Any Speed

Nader's 1965 publication, Unsafe at Any Speed was an attempt to attack the American automotive industry by making untrue statements concerning the safety features of the Chevy Corvair. Nader's campaign against the Corvair showed that he believed not only that the Corvair was dangerous but that General Motors (GM) knew it was. Nader convinced liberal Connecticut Senator Abraham Ribicoff into investigating whether GM had lied about what it knew in testimony before Congress. Nader alleged that he had inside sources and documents that would reveal this conspiracy. Ribicoff assigned staff to the case, and they spent two years chasing down Nader's leads. None of them panned out. The investigators found no evidence that GM knew of the Corvair's safety flaws.[1] The failure to confirm Nader's suspicions enraged him. "He could not let go of the Corvair issue," one of the staffers would later say. "He was fixated. And, if you didn't accept or believe the same things he did, you were either stupid or venal."[2]

In 1971, Nader pressured one of his associates, Lowell Dodge, to doctor his study Small on Safety: The Designed-in Dangers of the Volkswagen.[Citation Needed] Nader insisted that Dodge rewrite the conclusion of the study so that it began, "The Volkswagen is the most hazardous car in use in significant numbers in the U.S. today." Objecting that "the conclusion is not reflected in the data," Dodge left the project, allowing others to take credit as principal authors. "I have always carried around considerable guilt about what I regard as the extreme intellectual dishonesty of that conclusion," he later concluded.[3]

Nader sued GM and won $425,000, which he used to found liberal activist organizations that helped push through a staggering series of consumer and environmental reforms, most of them in the late 1960s and early 1970s.

Nader's most successful run for President was in 2000, when, as the Green Party's nominee, he garnered 2.7% of the popular vote, and was blamed by many liberals for the loss of Al Gore to George W. Bush, the reasoning being that most of the people who voted for him would have preferred Gore to Bush, and that thus Nader's candidacy may have tipped the election in Bush's favor.[4]

In Nader's 2004 presidential run, a concerned Democratic party successfully sued Ralph Nader off the ballot in 19 states. In Pennsylvania alone, not just one lawsuit in one court but twelve suits in twelve separate courts simultaneously.[5] While he was still the most successful third party candidate, he managed barely a seventh of his 2000 performance, at just 0.38% of the popular vote. He ran again in 2008 and performed slightly better than in the previous election, this time getting 0.5% of the vote, despite running in even fewer states than he did in 2004.