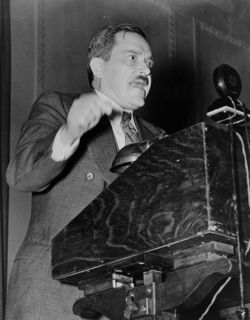 Earl Browder (May 20, 1891 - June 27, 1973) was the General Secretary of the Communist Party of the United States of America (CPUSA) from 1932 to 1945. During World War II, when the United States and Soviet Union were allied fighting Nazi Germany, Browder publicly took the position that Communism and capitalism could coexist, which was the position the Soviet Union had taken during World War II. Browder was removed from leadership in 1945 for deviationism.

Chairman of the Communist Party

In 1932, Browder became chairman of the CPUSA, during that time he embarked on an ambitious vision for the party. He called that vision "Communism is Twentieth Century Americanism".[2][3]

Complicity in Soviet espionage and subversion

Browder, as CPUSA General Secretary, long benefited from the denial of the liberal and leftist intelligentsia that the CPUSA participated in Soviet espionage against the United States. These assertions continue, despite the presentation of substantial contrary evidence over the years by Elizabeth Bentley and others [4][5] the Venona cables, the Judith Coplon, Alger Hiss, and William Remington trials, as well as dozens of articles and books. In the Venona cables he is known as Agent "HELMSMAN".

In 1939 Browder appointed Rudy Baker to head the CPUSA underground apparatus to replace J. Peters, after the defection of Whittaker Chambers. Browder was sentenced to prison in 1940, ostensibly due to passport violations, but was released after 14 months when the US joined World War II and became an ally of the Soviet Union. Browder embraced the Popular Front and led the CPUSA's tactic of expressing cautious support for the New Deal of Franklin Delano Roosevelt while demanding that it should go much further than it did.

During this period Browder successfully recruited dozens of operatives from amongst his associates for Soviet intelligence. An indication of Browder's cooperation with the KGB can be derived from a discussion Jacob Golos had with Browder in November 1943 regarding a group of KGB informants he was running. Browder became involved in the operation, and after Golos's death that same month, Browder arranged with Bentley to take over the Perlo group. She met the members in John Abt's apartment in New York.[6] Venona decrypt #588 April 29, 1944 from the KGB New York office states “for more than a year Zarubin (station chief) and I tried to get in touch with Victor Perlo and Charles Flato. For some reason Browder did not come to the meeting and just decided to put Bentley in touch with the whole group. All occupy responsible positions in Washington, D.C.” [7]

Earl Browder's close association with the KGB was further borne out by the fact that he was the recipient of classified data. KGB Case Officer Iskhak Akhmerov and Nathan Gregory Silvermaster agreed that Akhmerov would pass intelligence on the Chinese Communist Party to Browder through KGB Rezident Anatoly Gorsky or CPUSA organizational secretary Bernard Schuster. Browder's niece, Helen Lowry was married to Akhmerov and was a KGB spy, too.

During the Presidential election of 1944, on May 23 at a rally in New York's Madison Square hailing the "Democratic Coalition," Browder announced the birth of the "Communist Political Association," which he described as "a non-party organization of the American working class dedicated to the traditions of Washington, Jefferson, Paine, Jackson and Lincoln, under the changed conditions of modern industrial society." [9]

In May 1944 Raissa Browder, Browder's wife who had entered the United States illegally, was permitted to become a citizen. According to the sworn testimony of ex-Communist Howard Rushmore, State Department and Immigration Service officials insisted upon this at the urgent requests of Secretary of State Cordell Hull and Mrs. Eleanor Roosevelt.[10]

Browder is referenced in

In April 1945 Jacques Duclos of the French Communist Party published a repudiation of Browderism. Browder was expelled from the American Politburo in February 1946. Browder at the time held a 5-year contract to represent Soviet publishing houses in the United States which kept him on the payroll for a time.[11]

In a speech delivered on January 17, 1949, which was reprinted as a pamphlet entitled Chinese Lessons for American Marxists, Browder points to this distinctiveness of Chinese Communist Party theory, its “exceptionalism” as the reason for its success. He quotes from several of Anna Louise Strong’s articles in support of his thesis that Mao Tse-tung’s policy has been to develop a particular line for Chinese Communism, to "China-ise Marxism and Leninism." (Page 9.) Browder quotes extensively from The Thought of Mao-Tse-tung by Anna Louise Strong. Browder was purged for just such an exceptionalist approach in the United States.[12]