From Conservapedia
Jump to: navigation, search
The Wikipedia entry about Che Guevara, which flatters him and conceals his wrongdoing, is an incredible example of Bias in Wikipedia. The victims of Che poster

As Castro's executioner, he came to be known as "The Butcher of La Cabana," rallying up a massive body count even though he himself was easily cowed by anyone with guns regardless of if he was armed or not.[4][5] Despite being a terrorist, his image is still used as leftist propaganda which adorns millions of T-shirts and dorm room posters. "Ernesto Guevara failed spectacularly at everything he attempted in his life--except at the mass-murder of defenseless men and boys."[6]

Che wasn’t really a gentle soul and a selfless hero. He was a violent Communist who thought nothing of firing a gun into the stomach of a woman six months pregnant whose only crime was that her family opposed him. And he was a hypocrite who lusted after material luxuries while cultivating his image as a man of the people. (Amazon)

Guevara captured and killed by Bolivian soldiers after his small guerrilla army had entered their country. Guevara begged for mercy that he did not give his victims: "Do not shoot! I am Che Guevara and I am worth more to you alive than dead."[7] The Bolivian President ordered his execution.

Guevara was the eldest of five children born in Rosario, Argentina. His schoolmates nicknamed him "pig" (El Chancho) because he rarely bathed, and smelled bad.[8] He also enjoyed killing dogs.[9] In 1955, while living as a hobo, Guevara met Raul and Fidel Castro to plot the overthrow of the US-backed Fulgencio Batista government in Cuba. Their first revolutionary plan was an assault on Cuba from Mexico. During the war, Castro promoted Guevara to commander status, and Guevara won the Battle of Santa Clara. This defeated Batista's forces and allowed the bearded guerrillas to march on towards Havana. A series of promotional news articles in The New York Times written by Herbert Matthews bolstered the popularity of the revolutionaries. On New Year's Eve 1958, Batista's forces were defeated and on New Year's Day, Batista fled to the Dominican Republic. Castro and Guevara became Cuba's new socialist revolutionary leaders. Guevara killed many thousand people, who were "enemies of the revolution". Those "enemies" were Homosexuals, dissidents or AIDS-infected people.[11]

Guevara was appointed commander of the La Cabaña Fortress prison. He oversaw the trial and execution of many former Batista regime officials. Roberto Martin-Perez was imprisoned for 30 years in Castro's dungeon prison. Roberto says "Castro ordered mass murder ... in order to consolidate his power." Guevara, as Castro's chief executioner, relished the slaughter of defenseless men and boys.[12] Guevara became feared for his brutality and ruthlessness. During the 1961 Bay of Pigs invasion, Castro ordered Guevara to take up a command post in Western Cuba. He never saw any fighting and did not participate in the Cuban victory. However, he dropped his pistol and shot himself in the face. Guevara was the main proponent of missiles in Cuba and urged Khrushchev to nuke the United States.[13]

Despite the overall pro-USSR culture of the Cuban revolution, Che found a certain veneration for Maoist China.[14] He visited China in the mid 1960's and met Mao.

In December 1964, he gave a speech before the U.N. General Assembly mocking the "imperialism" of the USA, and also freely admitting that he killed and will continue to kill "enemies of the revolution."

The number of executions he ordered is unknown, with conservative estimates ranging from 400 to 2,000 over his lifetime. Unfortunately, lack of records mean that the exact number will probably never be known. 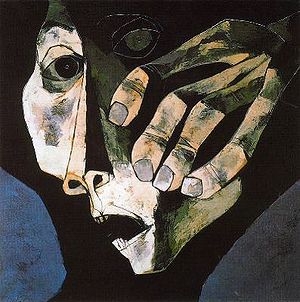 Guevara authored an insurgent booklet entitled Guerrilla Warfare.[15] He left Cuba to lead a Communist guerrilla movement in South America. Bolivian soldiers, trained, equipped and guided by U.S. Green Beret and CIA operatives such as Felix Rodriguez,[16] hunted him down in the Bolivian jungle where he was captured. He cried out "Do not shoot! I am Che Guevara and worth more to you alive than dead." [17]

However, the U.S. and Bolivia knew better. Due to his violent nature, the Bolivians wanted to decapitate his head as proof that he was finally gone. However, being repulsed at the grotesque nature of this the soldiers who captured Che instead chopped off his hands and put them into a jar of formaldehyde as proof.[18][19] He was executed by Mario Terán 2 days later.

Because of the Soviet's all-time low popularity at the time, and by extension all of Communism, Che was immortalized by Castro by implementing a romantic version of Che as part of a propaganda campaign shortly after Che's death in Bolivia. One of the people instrumental in this campaign was French philosopher Jean-Paul Sartre, who himself was a Communist in bed with the KGB, having referred to Che Guevara as "the most complete human being of our time." Ion Mihai Pacepa had heard of the propaganda campaign back when he was still serving the Romanian communist party.[20] As such, alongside Chinese dictator and mass-murderer Mao Zedong, Che's image has (ironically enough) been used for merchandising.