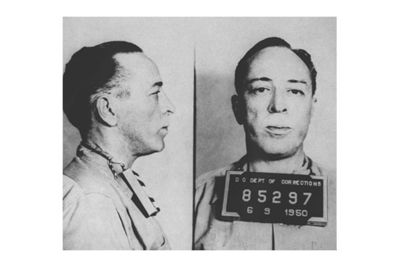 Dalton Trumbo (1905-1976) was a communist screenwriter, subversive, propagandist and member of the Hollywood Ten.

One of his most famous works is Johnny Got His Gun, a bitterly pacifist anti-war novel that won him the National Book Sellers Award in 1939 during the Hitler-Stalin alliance. The book follows the thoughts of a young World War I American infantryman who becomes a quadruple amputee, as well as deaf, mute, and blind. Having no way to communicate with the outside world, he spends most of the book reminiscing about his life and meditating on the futility of defending democracy and war and the science of medical ethics.

The book was published in 1939, during the Nazi-Soviet pact, when the Party line was to keep the U.S. from interfering with the communist and Nazi agreement to divide up Europe. The book was serialized in the Communist newspaper The Daily Worker. Upon the collapse of the pact, Trumbo followed the party line, reversed course, and become fanatically pro-war. He "immediately scurried to withdraw the book from circulation, and bookstores were ordered to send their copies back to the publisher."[1] When fans wrote to Trumbo requesting copies of the book, he "named names" labeling them as fascist sympathizers and turning them over to the FBI, writing:

In 1944, Trumbo personally invited the FBI to his house to turn over the names of people who had asked him for copies of the novel.

Trumbo was a member of the Communist Party of the USA (CPUSA) throughout the 1940s and '50s. He was no friend of free speech. He wrote to Herbert Biberman, a fellow Communist screenwriter, that "whenever a book or play or film is produced which is harmful to the best interests of the working class, that work and its author should and must be attacked in the sharpest possible terms."[3] Calling Stalin “one of the democratic leaders of the world,” Trumbo moved to prevent a film being made that was to be based on Leon Trotsky's biography of the Soviet leader.[4] When fellow Communist screenwriter Albert Maltz published a defense of artistic freedom, arguing that literature should not be judged solely on the politics of its author, Trumbo participated in a Party inquisition, browbeating Maltz for his heresy until he publicly recantated. According to University of Maryland Professor Art Eckstein, Maltz, who also later was brought before HUAC (and went to jail for refusing to testify), told historian Gerda Lerner "that his appearance before HUAC in 1947 was simply nothing compared to the real and psychologically-destructive trauma of his criticism/self-criticism sessions before the Communist Party in 1946." Eckstein continues:

Long before the Blacklist, there was Hollywood's Communist "Redlist." In The Worker, Trumbo openly boasted that the comrades had prevented the production of Hollywood films based on books banned by Stalin, including classics such as Arthur Koestler's Darkness at Noon and Victor Kravchenko's I Chose Freedom.[6] When Hollywood screenwriter Richard MacCauley submitted a piece to Screenwriter magazine opposing left-wing censorship, Trumbo, who was then the magazine's editor, rejected the piece, denouncing the "inalienable right" to free speech, which he claimed had "directly resulted" in the Holocaust:

Trumbo claimed to have ghost-written Secretary of State Edward R. Stettinius, Jr.'s Report to the Nation on the 1945 founding conference of the United Nations, where Alger Hiss presided as Secretary General.[8] In 1946, he hosted a CPUSA meeting, allegedly to discuss putting Communist propaganda in Hollywood movies.[9] At that time, the Soviet Union was becoming America's Cold War enemy, and it controlled the CPUSA. In 1947, the House Un-American Activities Committee called Trumbo to testify about Communist influence in Hollywood. In the course of this hearing, the committee introduced into evidence a Communist Party registration card for 1944, issued under the name "Dalt. T.," identified as a motion picture writer, residing at 620 Beverly Drive. Trumbo's Communist Party card number was 39300.[10] Trumbo refused to testify, and spent 11 months in prison for contempt of Congress. He, along with nine other Communists convicted of contempt of Congress, are known as the Hollywood Ten for allegedly being blacklisted by the Motion Picture Association of America (MPAA) and had difficulties getting scriptwriting jobs and often worked under a pseudonym. However, after receiving full writing credits on such movies as Spartacus and Exodus, he was reinstated into the Writers' Guild of America.[11]

Trumbo's last writing credit was a 1971 screenplay for a movie version of Johnny Got His Gun. Trumbo died of lung cancer in 1976.