Deng Xiaoping (1904-1997) was a Chinese Communist Party leader and China's most powerful figure from 1978 until his death. Deng Xiaoping was a vice premier of the People's Republic of China and general secretary of the Chinese Communist Party. Deng approved the order to unleash the Peoples Liberation Army upon innocent civilians in the Tiananmen Square massacre, June 4, 1989.[1]

After the mid-1980s the new leader Deng Xiaoping promoted rapid modernization. While Mao's memory was still revered, most of his brutal policies seemed as if they were ended and much economic freedom—and a dash of political liberalization—was allowed. Intellectuals were encouraged to speak out again and to share in a new spirit of "democratization." However Communist party leaders in 1986 warned that modernization must not be used as an excuse to introduce "bourgeois philosophies and social doctrines." 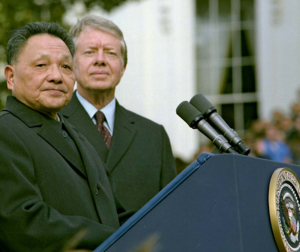 By late 1986 student groups began to demonstrate demanding more student participation in local government, a greater degree of democracy, and better living conditions. As demonstrations escalated Hu Yaobang, the general secretary of the party, resigned, confessing that he had made major mistakes and would take responsibility for them. It was a setback to political and economic liberalization, though Hu remained, out of office, a symbol of the potential for democracy.

Hu's death in April 1989, sparked widespread public rallies in favor of broad social changes in Beijing, Shanghai, and other major cities. Tens of thousands of students defied a government clampdown to demonstrate in May 1989 in Tiananmen Square central Beijing. The Party moved to kill dissent, sending uneducated rural troops into square on June 3–4; thousands of demonstrators were killed, wounded, or arrested. The world was appalled. Following the savage repression of democrats in all major cities Deng Xiaoping appeared to be even more firmly in control.

Deng made a public appearance when he received and praised the commanders of the martial-law units in a televised speech on June 9, 1989. In the speech, Deng reaffirmed government's stand expressed in April 26 People's Daily editorial and gave high marks to the crackdown.

Deng's renewed push for a market-oriented economy received official sanction at the 14th Party Congress later in the year as a number of younger, economic reform minded leaders began their rise to top positions. Deng and his supporters argued that managing the economy in a way that increased living standards should be China's primary policy objective, even if "capitalist" measures were adopted. Subsequent to the visit, the Communist Party Politburo publicly issued an endorsement of Deng's policies of economic openness. Though not completely eschewing political reform, China has consistently placed overwhelming priority on the opening of its economy.

In an April 10, 1974 speech to the United Nations General Assembly Deng said,