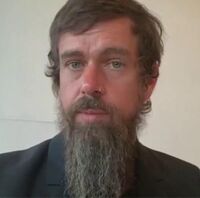 Jack Patrick Dorsey (b. November 19, 1976 - ) from St. Louis, Missouri, is a leftwing totalitarian fascist Big Tech oligarch and former CEO of Twitter. Dorsey is known for his illegal anti-free speech activities and advocacy of single party corporatism. The corporate CEO sports a nose ring, an ancient pagan symbol and disciplinary device to denote a slave who needs to be lead around by the nose. As CEO of a Big Tech monopoly, Dorsey illegally interfered in the 2020 Presidential election in an attack on American democracy. After Twitter lost a lot of popularity and money after interfering in the elections, Dorsey decided to step down as CEO of Twitter.[1] and Twitter stock soars after announcement for his step down.[2]

In the Islamist tradition, Dorsey does not trim or shave his beard. Dorsey claimed in Congressional testimony under oath that Iranian Ayatollah Khamenei’s threatening, anti-Semitic tweets don’t violate Twitter rules.[3] White House Press Secretary Kayleigh McEnany said of Dorsey's efforts at censorship, blackmail, and election interference saying "This is what happens in North Korea, not the United States.”[4]

In a July 2012 interview with the Wall Street Journal Dorsey explained his future plans. The paper noted, "Twitter executives still fight a perception that the service is only for tech geeks or narcissists, and there remain doubts about how big the San Francisco company can grow."[5] Twitter wants to encourage users to communicate about particular events while they happen. Twitter plans to encourage independent application developers to use Twitter as a platform. It hopes to add tools to allow companies to analyze messages that discuss particular companies and events.[5]

Dorsey was active in the Biden Putsch coup plot.

In September 2021 Twitter disclosed a binding agreement to settle a class-action lawsuit, under which the social network wOULD pay $809.5 million to resolve claims it provided misleading user-engagement info to investors.

The original lawsuit, filed in 2016 by a Twitter shareholder, alleged Dorsey and others including former CEO Dick Costolo and board member Evan Williams hid facts about Twitter’s slowing user growth while they sold their personal stock holdings “for hundreds of millions of dollars in insider profits.”[6] Dorsey refused to ban the Taliban terrorist organization from Twitter.

For first time in American history social media companies took direct action against a major U.S. publisher,[9] The New York Post when it published a story on Biden-Burisma scandal.[10] The Post is among the top five newspapers by circulation in the United States. These actions raised serious questions about many social media platforms future Section 230 immunity status.

Twitter and Facebook illegally interfered in the 2020 presidential election by blocking links to the article.[11][12] Twitter and Facebook both have many foreign stockholders.[13] Twitter illegally banned people who posted The New York Post story,[14] including White House Press Secretary Kayleigh McEnany for sharing the article,[15] and illegally locked the Trump Campaign account less than three weeks before the 2020 Presidential election.[16] Rep. Jim Jordan posted the Biden-Burisma story on a federal government website after Twitter censored the House Judiciary GOP, at which point the link was promptly censored by Twitter.[17] Wikipedia editors censored the Hunter Biden bombshell, and baselessly called the New York Post an "unreliable" source.[18] Google also was reported to be illegally meddling in U.S. Senate elections.[19] The Senate Judiciary Committee announced that Twitter CEO Jack Dorsey would be subpoenaed to explain the meddling.[20] Former James Comey general counsel James A. Baker (DOJ), who was complicit in the Obamagate and FISA abuse scandals, is Twitter's lead counsel.[21] The RNC made a formal complaint to the Federal Elections Commission which reads in part,

By "fact checking" one candidate and not another, Big Tech gave an enormous in-kind campaign contribution of immeasurable monetary value to the Biden campaign.