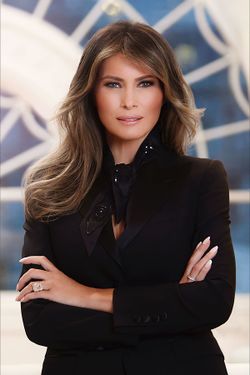 Melania Trump (née Melanija Knavs; b. April 26, 1970) is First Lady of the United States as the wife of Donald Trump. Unlike prior First Ladies who have moved to D.C., Mrs. Trump puts raising her child first and has remained at her residence in New York City so that her son Barron Trump can finish his school year without changing schools midyear to one in Washington, D.C.[1] On International Women's Day in March 2017, Melania Trump rejected feminist ideology by wearing black rather than the solidarity red, and by giving a speech that criticized the mindless equality of communism and instead emphasizing equal opportunity.

First Lady Melania Trump made history by reciting The Lord's Prayer in front of a massive rally for her and President Trump in Melbourne, Florida, on February 18, 2017.

Melania Trump met her future husband, Donald Trump at a Fashion Week party in New York City in September 1998. After becoming engaged in 2004, Donald and Melania were married in an Anglican service on January 22, 2005, at The Episcopal Church of Bethesda-by-the-Sea in Palm Beach, Florida.

On July 18, 2016, Melania Trump gave a spectacular presentation to the 2016 Republican National Convention, which even critics of Trump widely praised. But liberals found a similarity—unbeknownst to Melania—in merely one paragraph of the speech to a paragraph given by Michelle Obama's speech at the 2008 Democratic National Convention.[3][4][5] When asked, Trump explained that she wrote the speech herself "with as little help as possible."[6] Two days later, Trump staff writer Meredith McIver took responsibility and apologized for the "confusion".[7] The public was unimpressed by the lamestream media emphasis on this story.

The bias by the liberal media against Melania has been unfair, and sometimes harsh.[8] For example, in February 2017, New York Times reporter Jacob Bernstein (son of Watergate reporter Carl Bernstein) referred to Trump as a "h***er" in a private conversation that the other party to the conversation then sent out in a tweet. In response, Bernstein apologized for spreading an unfounded rumor, and the New York Times reprimanded him.[9] The media was very biased against Melania Trump, especially compared to Michelle Obama.[10]