Camp entrance slogan, "work liberates" or "work makes one free" was placed at the entrances of many Nazi concentration camps.

Auschwitz is the name of the greatly feared German concentration camp system that was located outside the city of Oswiecim in Poland. This site is now known for the extermination of over one million European Jews and Poles.

The camp system was made up of three sub camps:

The camp was run by the SS. It was the home to the brutal German doctor Dr. Josef Mengele. When the camp first began many Poles were sent there to either work to death, be an experimental subject for Dr. Josef Mengele, or to just rot away. Later in the war the Nazis started sending Russians and other people who opposed them in the slightest way. 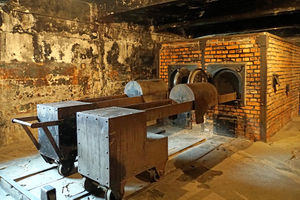 A crematorium used to dispose of the victims' bodies. It is deep enough to insert two bodies end-to-end.

The camp is infamous for its gas chambers, where the Nazis used Zyklon B as their primary method of execution and crematoria which were then used to dispose of the bodies. The gas chamber and the crematoria, which were formerly a Polish army bunker, are still standing today.

Towards the end of the war the Nazis had to cover up all the murders committed there; they evacuated all the men who could walk (about 60,000)[1] and forced them into the last defenses of Germany. But it was not all hidden. 7,500 prisoners were liberated by the 322nd Infantry unit of the Red Army on January 27, 1945, exposing the brutality of the Nazi regime. The mass murders committed at Auschwitz represented a scale of horror unprecedented in human history and not seen ever since. In all, between 1.1 and 1.5 million people died in the prison camp. Ninety percent of them were Jews. The other ten percent included about 83,000 Poles and 19,000 Roma (Gypsies).[2]