A supernova is a large stellar explosion that releases a tremendous amount of energy and destroys the star in which it originated.[1] There are two types of supernovas, called, easily enough, type I and type II

Although the exact mechanism that causes type I supernovae is still not entirely understood, for type Ia supernovae, it is generally accepted to occur most often in binary star systems where one of the binary stars is a white dwarf (typically a carbon-oxygen dwarf) that is drawing mass from its high mass companion. As the mass from from the companion accumulates on the surface of the white dwarf it compresses and heats up. Often, the hydrogen in the accumulated mass will heat enough to initiate hydrogen fusion, causing a nova. If however the white dwarf accumulated enough matter from its companion to achieve a mass that surpasses its Chandrasekhar limit, the white dwarf will no longer be able to support itself via electron degeneracy pressure against the increase in gravity from the additional mass.[2] A significant portion of the white dwarf will then undergo nuclear fusion within seconds, releasing enough energy to cause the star to explode as a supernova.[3]

Type Ia supernovae are important to astronomy because they act as standard candles for measuring extra-galactic distances, especially pertaining to other galaxies. This is due to such supernovae explosions having the same luminosity, an absolute magnitude of -19.3 (some five billion times the sun's brightness). The source of this brightness is the generated by radioactive decay of nickel-56. The nickel-56 is formed during the explosion event itself and decays through cobalt-56 to iron-56.[4]

In 1998, observations of the apparent magnitude of several type 1a supernovae in other galaxies, resulted in the surprising finding that the universe is expanding at an accelerated rate, due to Dark Energy.[5]

Type lb and Ic supernovae, like Type II supernovae, are from massive stars that are running out of core fuel for fusion. The stars for type Ib explosions had their outer shell of hydrogen lost or striped away. The stars for type Ic explosions have lost most of both their hydrogen and subsequent helium shell. This loss is either due to intense stellar winds, or from interaction with a nearby binary companion of sufficient mass.[6] It is believed that type 1b supernovae are from exploding Wolf-Rayet stars. There is some evidence that a small percentage of type Ic supernovae are the source of Gamma Ray Bursts.[7] Supernova 1994D, visible as the bright star in the lower left, occurred in lenticular galaxy NGC 4526

A type II supernova is a violent stellar event involving a massive star of at least eight solar masses at the end of its life, when it's unable to maintain itself anymore through nuclear fusion, causing a chain reaction that leads to the collapse of the star's core and subsequent explosion.[8]

When a star converts most of its core hydrogen fuel to helium through thermonuclear fusion, it evolves off of the main sequence. As the hydrogen fuel is exhausted, helium accumulates and the core begins to contract. As the core contracts, it heats up and the helium begins to fuse into carbon and oxygen. For stars with masses eight times or less than that of our Sun, there is not enough mass to compress and heat up the core sufficiently to fuse elements heavier then helium, once all the helium fuel is used up. Such stars simply lose their outer atmospheres as planetary nebula and end their lives as white dwarfs that gradually cool over time.

For more massive stars, once the core again contracts after the helium fuel is used up, there is sufficient mass and energy to fuse the carbon and oxygen at the core into heavier elements. This process is repeated over and over when the nuclear fuel is exhausted, and the fusion at the core again stops until the core contracts and heats up enough to start the next phase of fusion of these heavier elements. At each phase, more and more energy is required to fuse the increasingly heavy atomic nuclei. The result are "onion layers" of subsequently heavier elements in the interior of these massive stars. 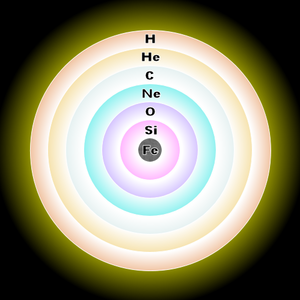 Artist rendition of a massive star just before supernova collapse.

The repeating collapse and fusion process of core elements will continue until nickel-56 is produced through fusion, which decays into iron-56. The star is unable to fuse this iron-nickel core due to their extremely high binding energy (highest of all the elements), as it would take more energy then what would be released.[9] This results in the iron-nickel core growing more and more massive over time (due to continued fusing of lighter elements into nickel-56). Eventually the core will reach the Chandrasekhar limit (1.4 times the mass of our Sun) where electron degeneracy pressure is no longer able to hold the core up against gravity and the core catastrophically collapses.[10]

As the core collapses, protons and electrons are forced together to produce neutrons and neutrinos. Neutrinos don't normally interact with matter very easily, so they escape the core, carrying with them a tremendous amount of outward energy and pressure. Meanwhile, the core continues to collapse until the neutrons become too tightly packed together and the collapse is halted by neutron degeneracy. This causes the inbound matter to rebound in a tremendous shock wave. The result of these twin effects of a rebounding shockwave and neutrino outburst causes the rest of the star outside the core to be blasted away in a tremendous supernova explosion.

Only around 1% of the energy produced is released in the form of heat and kinetic energy from the ejected outer gas layers. The other 99% being released as neutrinos during the supernova explosion. Despite this, there is still enough visible energy for the supernova to exceed the visual luminosity of the sun by a factor of a billion or more. The source of most of the metals (all elements heavier then hydrogen and helium) in interstellar space that leads to the formation of new star systems are from these supernova explosions. These "metals" are either produced through fusion during the end of the star's life, liberated during the explosion, or in the case of elements heavier then iron-56, are formed via supernova nucleosynthesis through the r-process during the explosion itself.[11][12]

The remaining core of the supernova will collapse into a degenerate neutron star, if the original star core is under 2 to 3 solar masses. For a core of greater mass, the core will continue to collapse into a black hole, as neutron degeneracy will not be able to hold back the force of gravity.[13]

While many supernovae have been seen in nearby galaxies, they are relatively rare events in our own galaxy. The last to be seen was Kepler's star in 1604. This remnant has been studied by many X-ray astronomy satellites, including ROSAT. There are, however, many remnants of supernova explosions in our galaxy, that are seen as X-ray shell like structures caused by the shock wave propagating out into the interstellar medium. Another famous remnant was observed in 1054, when Chinese astronomers recorded a supernova so bright that it was visible during the day. This supernova is believed to be the one reported by Marco Polo. The explosion left behind a pulsar and a huge cloud of gas and dust known as the Crab Nebula, which still can be seen today with its pulsar rotating 30 times a second and emitting X-rays in a fashion similar to a lighthouse.[14]