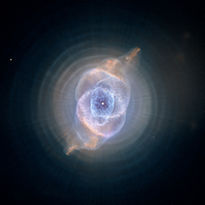 The Cat's eye nebula is an excellent example of a planetary nebula.

A planetary nebula is a rare type of nebula that is smaller and fainter than other types of nebulae such as diffuse nebulae.[1] They are typically composed of a white dwarf surrounded by shells of expanding luminous gas.[2] There are thought to be 20,000 such objects in the Milky Way, though the effects of dust mean only around 1,800 have been observed.[2] Superb examples of a planetary nebulae include the Ring nebula, the Helix nebula and the Cat's eye nebula.

The term "planetary nebula" was coined by William Herschel in 1784/1785 as he believed them appear like the planet Uranus which he had recently discovered.[1] Hershel went on to discover a further 33 planetary nebulae through his systematic observation of the night sky.

Planetary nebulae are normally much smaller than other nebulae, having radii of order 1 light year and a mass of 0.3 solar masses.[2] Most contain a star which ionizes the surrounding gas creating spectacular colours. The nebulae tend contain large quantities of elements heavier than helium such as carbon and oxygen. These different elements are responsible for the wide variety of colours in planetary nebulae. The abundance of each element varies from one nebula to another. Some nebulae also contain dust.

For most planetary nebulae, the star at the centre is a white dwarf.[2] These are small stars but extremely dense, having densities of over a billion kg/m3.[3] They are also extremely hot, having temperatures in the range 35,000 to 40,000 kelvin but are also much fainter than most stars.[2]

Secular Science states that planetary nebulae are formed when red giant stars shed their outer layers to become white dwarfs, producing a large gas cloud surrounding the star.[4] However this would require millions of years, much longer than the 6,000 years suggested by the Bible and by other evidence. Instead creation scientists suggest that God created planetary nebulae along with stars and planets on the forth day of creation week (Genesis 1:16).[5]