From Conservapedia
(Redirected from Dark nebulae)
Jump to: navigation, search 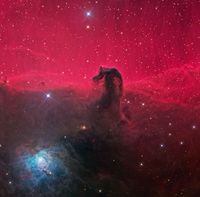 A dark nebula, also known as an absorption nebula, is a type of nebula formed from gas and dust and visible because it blocks out and absorbs light from stars or bright nebulae behind.[1] Dark nebulae may also contain stars, but these are obscured by the nebula. This dust also prevents light from stars outside the nebula from reaching its interior, making the centres of dark nebulae some of the coldest places in the universe.[2] Well known examples of dark nebulae include the Horsehead nebula and the Coalsack nebula

Dark nebulae come in a range of sizes; the smallest are only a couple of light years across, containing only a couple of thousand solar masses of material whereas the largest can be over 600 light years across, some containing more than a million solar masses of interstellar material.[3] The largest dark nebulae are called giant molecular clouds. Typical densities within clouds are 100-300 molecules per cubic centimetre.[4]

In the outer layers of the nebula, interstellar ultraviolet radiation causes hydrogen in the cloud to exist as neutral atoms.[4] These layers absorb this radiation, preventing it from reaching further into the cloud. This allows molecules to form deeper within the nebula, and over 70 different chemical species have been found within such nebulae.[4] The extreme conditions of low temperatures and pressures produce unusual chemistry. As an example, both hydroisocyanic acid, HNC, and hydrocyanic acid, HCN, have been found in the same cloud in equal quantities, whereas on Earth hydroisocyanic acid would break down an reform into hydrocyanic acid.[4]