The Eta Carinae nebula (NGC 3372) is a diffuse nebula in the constellation of Carina.[1] One of the largest diffuse nebulae known, it is an emission nebula surrounding the star Eta Carinae. It is similar in many ways to the smaller Orion nebula and can be seen with the unaided eye, but only from southern locations as well as without the vibrant colors.[2] It is sometimes refered to as simply the "Carinae nebula" or "Carina nebula" or even the "Grand Nebula", or the "Great Nebula in Carina".

The Carina nebula was first observed in 1751-1752 by Nicolas Louis de Lacaille.[3] Originally before 1840, the star Eta Carinae appear like any other star nebula did not exist.[4] However after 1840 the star began to brighten and by 1848 it was the second brightest star in the night sky. It then proceeded to slowly diminish in brightness until 1880 when it was no longer visible to the unaided eye.

Distance to the Eta Carinae nebula is estimated at 7,500 light years, though such estimates vary from 6,000 to 10,000 light years.[1] This places it in the Carina-Sagittarius Arm of the Milky Way.

The nebula is extremely large. It is 3° across, making it at least four times greater than the Orion nebula.[1] The gas cloud 460 light years across and is expanding at around 670 km/s.[5] The mass of the nebula is thought to be over 900,000 solar masses.[1] The gas in the nebula is known to form very long but thin filaments or string.[6]

NGC 3372 is so vast, that various parts of it are identified as nebulae or other interesting features in their own right. This includes the star Eta Carinae, the Keyhole nebula, the Homunculus nebula and a region known as "Mystic Mountain". The Eta Carinae nebula is home to eight difference open clusters including Collider 228, Trumpler 16 and Trumpler 14, or which Trumpler 14 is the most populated.

The nebula also contains several extraordinarily massive and bright stars, Eta Carinae and HD 93129A being the two most notable. Multiple O-type stars can be found in the nebula as well as a dozen stars with masses between 50-100 times larger than that of the Sun.[1] The intense radiation produced by these humongous stars is responsible for illuminating the nebula.[7] The Eta Carinae nebula appears bright red because it is mostly composed of hydrogen, specifically the red hydrogen-alpha line at 656 nano-metres.[4] Other important optical emission features are due to the presence of oxygen - in particular the two [OIII] lines at 501 nm and 496 nm. In 2018, the Visible and Infrared Survey Telescope for Astronomy (VISTA) observed the nebula in the infrared, where the gas and dust in the nebula does not block the light.[3] It observed over 5 million light sources present within the nebula, seeing stars with masses as little as one tenth the mass of the Sun. 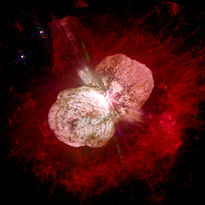 Eta Carinae is a binary system composed of two stars, one of which is one of the largest stars known.[8] The two stars are separately identified as Eta Car A and Eta Car B. The larger star is classified as a luminous blue variable star (LBV), with a mass 90 times that of the Sun and is 5 million times brighter. The smaller star is still extremely large and has been classified as a supergiant star having a mass of 30 solar masses and is thought to be a million times more luminous than the Sun.[8] However due to the thick clouds of gas and other material around the stars, the smaller companion star cannot be seen in the optical region of the electromagnetic spectrum.

The star system, which was first observed by Edmund Halley in 1677, has undergone several violent outburst over the past couple of centuries.[9] This occurred in 1843 (refered to as "Novae Carinae") and more recently in the 1990s. Large amounts of material are ejected from the star in the form of a stellar wind. The mass lost due to this wind is estimated at around one thousandth the mass of Sol per year.[9] The material that the star has ejected is known as the Homunculus nebula.

The Keyhole nebula is a small region of the Eta Carinae nebula known for its sculpted dust features.[10] The dust is shaped by the complex radiation generated by extremely energetic stars within the Eta Carinae nebula. The nebula was named the "Keyhole nebula" by John Herschel in the 19th century due to its a large, roughly circular feature.[11] The nebula has its own designation of NGC 3324 in the New General Catalogue.

The Homunculus nebula is a spectacular bipolar nebula composed of two large lobes of gas and material that surrounds Eta Carinae.[1] It is thought to have formed from material ejected by the star in 1843 when it briefly became the second brightest star in the night sky. In addition to the lobes, a thin disk between the lobes is also present. Both lobes and disk are expanding at over one million kilometers per hour.[1] Surrounding the lobes is more debris which can only be observed by its "glow" in a narrow band of red light.[12] It contains "whiskers" and bow shocks. The glow of Eta Carinae can be seen as a violet light coming from the core of the nebula.

The name means "little man" in Latin, refering it the fact is is a small nebula within a larger nebula. NASA have produced a 3d model of the nebula.[13]

Mystic Mountain is a name used to refer to a pillar of gas and dust situated within the Eat Carinae nebula that resembles a mountain top enveloped by clouds.[1] The pillar is though to be around three light years tall. The structure contains stars that emit jets of gas which can be seen emanating from the mounting peaks in image of the nebula. The region was photographed by the Hubble Space Telescope in February 2010 to celebrate the 20th anniversary of its launch.[14]