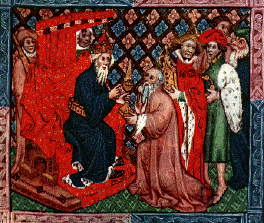 Marco Polo (Venice, Italy 1254 - Venice 1324) was a Venetian adventurer, trader, explorer and writer. He was one of the first westerners to travel to China on the Silk Road.[1]

Marco Polo spent 20 years in China (then Cathay) at the court of the Mongol prince Kublai Khan, along with his father and uncle. Before his trip to China, his father and uncle had gone all the way to the court of Kublai Khan and back (present day Beijing). Il Milione (also known as The Travels of Marco Polo) is the book that Polo wrote to bring back information of these exotic places. In the book he makes reference to much of Asia, including the Arab world, Persia and Japan. Il Milione, first entitled Le divisament dou monde ("The description of the world"), partly written whilst in a Genoese prison, was soon translated from French into many European languages.

It is said that Polo's description of the Far East inspired Christopher Columbus to try to reach Cathay by a western route.

Little is known of Marco Polo's life after his return to Venice in 1295 except for his marriage in 1296.