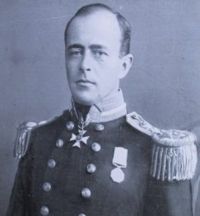 Sir Robert Falcon Scott
Robert Falcon Scott (1868-1912), popularly known as Captain Scott or Scott of the Antarctic, was a British polar explorer. He joined the Royal Navy in 1882 and in 1900 was appointed leader of the British Antarctic Expedition, despite having no previous experience of polar research. This expedition, known as the Discovery Expedition after the ship used, lasted from 1901 to 1904. Among other things it determined the nature and extent of the Ross Ice Shelf, and on one of many sledging expeditions into the interior Scott and his companions Edward Wilson and Ernest Shackleton reached a record south of 82 deg 17 min.

The Terra Nova
The aim of his second expedition in 1910-12 was to reach the South Pole. Departing from Cardiff on the Terra Nova, the expedition reached the Antarctic coast in early 1911. On arrival he learned that the Norwegian explorer Roald Amundsen had launched a rival bid for the Pole. Scott's main party set off on 1 October 1911. As the team marched forward, parties were periodically sent back to the Terra Nova; eventually, on 4 January 1912 the last supporting party was sent back and a group of five men - Scott, Wilson, Captain Laurence Oates, Lieutenant 'Birdy' Bowers, and Petty Officer Edgar 'Taff' Evans - prepared for the attempt on the South Pole. Scott's original plan had provided for a polar party of just four men; the decision to take five was made while the march south was underway. On 16 January a black marker flag left by the Norwegian expedition was spotted, and on 17 or 18 January the party reached the pole itself, where the Norwegians had built a snow cairn. Amundsen had reached the South Pole more than a month earlier, on 14 December 1911. Scott recorded in his diary "This is an awful place and terrible enough for us to have laboured to it without the reward of priority."

The party began the 800 mile return journey but began to succumb to malnutrition and exhaustion. In early February Taff Evans suddenly collapsed and died; on 19 March the severely frostbitten Oates walked out of the tent in a blizzard to his death, so as to no longer to delay his companions. Scott developed gangrene, and on 19 March he, Wilson and Bowers pitched a tent just 11 miles from One Ton Depot, a food depot they had established the previous year. They no longer had the strength to go farther. The last entry in Scott's diary was made c. 29 March and reads "We shall stick it out to the end, but we are getting weaker, of course, and the end cannot be far. It seems a pity, but I do not think I can write more - For God's sake look after our people."

Unlike the Norwegian party, Scott made little use of dogs. He deplored the (successful) Norwegian tactic of initially using large numbers of dogs to haul the sledges, progressively killing them and using the meat to feed the surviving dogs and the men. Instead, Scott planned to use in the early stages motor tractors (which rapidly broke down) and ponies - tough Manchurian ponies, which, however, were unsuitable for Antarctic conditions. For the latter stages of the journey south, and all of the return, he proposed to rely on man-haulage of the sledges. However, the allowances made for food rations were not sufficient for the demands being made on the men; physical degeneration, malnutrition and exhaustion, and unusually severe weather on the return leg, led to the fatal end to the expedition.