Sir Ernest Shackleton
Sir Ernest Henry Shackleton (1874–1922) was a British polar explorer who made four antarctic expeditions. In 1909 he reached within 100 miles of the South Pole.

The Endurance in full sail
On his third expedition, the Endurance Expedition of 1914–16, his ship became stranded in the ice and was eventually crushed and sank. For five and a half months the crew proceeded on foot, dragging one of the ship's life-boats across the ice until they were eventually forced to take the boats and set sail for Deception Island about 200 miles away. However, diminishing rations forced them to land on Elephant Island, a desolate, uninhabited island far from any shipping routes. Knowing that their only hope of survival was to make contact with the outside world Shackleton and a handful of others then set sail for the whaling station on South Georgia in the James Caird (one of the lifeboats).

After a voyage of 800 miles in an open boat, through freezing waters, waves of 20–50 ft and winds of up to 40 mph, Shackleton landed on South Georgia after 14 days at sea. Unfortunately the whaling station was on the opposite side of the island. With most of the crew exhausted, Shackleton and two others climbed over the mountainous terrain in freezing conditions and reached the whaling station 36 hours later. Although it was to be another 10 months before the rest of his crew were rescured every single member of the expedition survived.

Shackleton and his crew was rescued by the Chilean Marine Luis Pardo Villalón, at the command of the Yelcho ship, who took them to the city of Punta Arenas.[1] 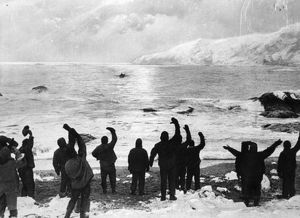 The rescue of Shackleton's men from Elephant Island

Shackleton died on his last expedition. Luis Pardo Villalón, the Chilean Marine who saved Shackleton and his crew.