From Conservapedia
(Redirected from Descartes)
Jump to: navigation, search 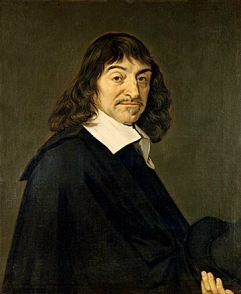 René Descartes (1596-1650) is known as the father of modern philosophy and algebraic geometry. He is most famous for his statement, "I think therefore I am" (in Latin, "Cogito, ergo sum"). A brilliant mathematician as well as a philosopher, Descartes viewed the mind as being in an unchallengeable state very different from the body. Descartes founded a school of rationalist philosophy called Cartesianism. After being educated in France and spending time in the military service from 1618 to 1619, he spent most of his creative life in Holland (1625 - 1649) before entering the service of Queen Christiana of Sweden shortly before his death.[1]

To write his famous Meditations on First Philosophy, Descartes locked himself in a room and thought about existence, arriving at the conclusion that he, as a thinking person, must exist, because even if existence is a delusion, there must be someone to be deluded. However, he was still not sure that the things he perceived exist as well. He used a variant of Anselm's proof of the existence of God to decide that perhaps he wasn't deluded, and perhaps things did exist after all. He thought the soul lived in the pineal gland, and when someone does something, it's just an accident because the brain doesn't control the body, God does. He also used God and a demon in attempts to justify his sense-perceptions and why they were perceived to be as they seemed rather than as something different, which is related to Berkeley's idealism in the sense that it is the mind which has the ideas of objects, but conforms to the 'two-world' theory of John Locke.

Descartes' most widely read work is his Discourse on Method (in French, Discours de la methode), published in 1637. There Descartes sets forth four rules for discovering knowledge:

Descartes established a metaphysical basis for his philosophy, that all philosophical propositions derive from a self-evident certainty of the mind, as in "I think therefore I am."