Dolphins (Greek: δελφίς, delphís, "dolphin") are a number of kinds of Cetaceans related to the toothed whales of the suborder Odontoceti, and are found throughout the world's oceans and several major river systems. Although fish-like in appearance, dolphins are mammals which breath air and suckle their young on milk.

Dolphins are streamlined for a life in the water; the body is cigar-shaped and tapered towards the tail, bearing a smooth, hairless skin which has a “rubbery” feel to the touch. The forehead bears a large, bulbous mass called a “melon”, which is thought to be the area where sound waves are focused when the animal echolocates or communicates with others. Behind the melon on top of its head is a single blowhole through which it breathes when it comes to the surface.

Dolphins have a pair of pectoral fins behind the head, which they use for steering. Primary propultion comes from the tail, which bears horizontal flukes made from subcutaneous dermal tissue; movement through the water consists of vertical sweeps of the tail. Speeds of dolphins have been estimated at 23-25 mph (37–40 km/h), which is enough to allow for “porpoising” i.e. the leaping of the animal out of the water at various times. Some species have been observed to reach higher speeds.

Most species of dolphins also bear a dorsal fin on their backs, made from the same dermal tissue as the tail flukes, and is believed to act as a stabilizer while moving. In some species (orca, grampus), the dorsal fin is rather large relative to the size of the body; in several others the fin is a small ridge extending over a portion of the back (river dolphins), or entirely non-existent (right whale dolphin).

Dolphins range in size from Maui's dolphin (Cephalorhynchus hectori maui) of New Zealand, which at 3.9 feet in length makes it the smallest cetacean of any kind; to the male orca or killer whale (Orcinus orca), which can reach lengths in excess of 30 feet and weigh in at 6 tons.

The word "porpoise" has also been used as an alternative name for dolphins; indeed, both names have been used interchangeably between dolphins and members of Phocaenidae, which include the true porpoises. The differences between the two are rather slight: dolphins have a beak-shaped snout bearing conical teeth, while porpoises have a blunt snout bearing spade-shaped teeth.

"Dolphin" is also a name of a species of game fish related to mackerals, and known as either mahi-mahi or dorado.

Captive animals provided much of the data for dolphin reproduction. Courtship and mating occurs during spring, with a gestation of 11 to 12 months. A single calf is born tail-first, which almost immediately begins to swim and surface for air. Calves in captivity have been known to nurse for up to 12 months before weaning; in the wild weaning is suspected to be much sooner.

Dolphins are found in nearly all oceans and seas of the world, from tropical environments to arctic conditions. Most species are pelagic (deep ocean), and some inhabit continental shelves towards the coast. There are four species of river dolphin; two inhabit the freshwater rivers of South America,[1] one in India, and the fourth – which may in fact be extinct[2] – lives in China.

Nearly all dolphins feed on small fish (herring, sardines, mackerel, etc.), shrimp, or mullusks (squid, cuttlefish); some individuals have been seen feeding exclusively on one particular food source as a matter of preference. Orcas are the exception, as they feed not only on fish, but seals, other dolphins, and several species of the larger whales as well. One female orca off California has also been spotted routinely killing great white sharks (Charcharodon charcharias) just for their livers. 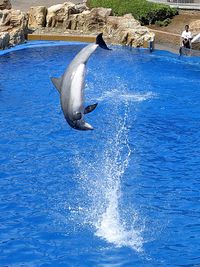 A dolphin leaping out of the water.

Dolphins are rated as being superior in intelligence to domestic dogs, and some scientists have made claims that they equal or surpase the intelligence of some primates. It has also been theorized that the sounds made by dolphins are actually a language. John Lilly, an American neurologist, conducted some experiments during the 1960s to test the validity of this theory without success; however, research still continues at several universities and laboratories around the world.

Dolphins and man have had a relationship with each other since ancient times, adapting well to human companionship either in captivity or out. Several dolphin species, notably bottlenose and common dolphins, pilot whales and orcas, are popular performers in marine-themed amusement parks and aquariums. Dolphins have also been trained by the United States Navy to retrieve objects or weapons lost at sea, or to act as “guard dogs” around submarine facilities.

Man has also affected dolphins in another manner: hunting and wholesale slaughter. Despite the affectionate image a dolphin has, man has feared the competition dolphins allegedly bring with regard to commercial fishing. The Japanese conduct yearly harvests against dolphins in which thousands are unhumanely slaughtered, and in the late-20th century tuna boats – which ironically rely on dolphins to locate schools of tuna – trapped and drowned thousands more via nets.

See also: Flipperpithecus and Paleoanthropology and Evolution and Cases of Fraud, Hoaxes and Speculation

Flipperpithecus was the name of the "humanoid species" arising from a fossil find that is most likely part of dolphin's rib. The name "Flipperpithecus" was given by anthropologist Dr. Tim White and reported in Science News.[3]

Dr. White added "The problem with a lot of anthropologists is that they want so much to find a hominid that any scrap of bone becomes a hominid bone."[4][5]