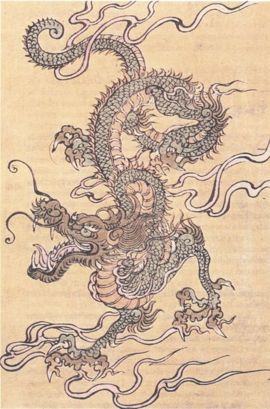 Dragons are reptillian or snake-like creatures that share many characteristics with dinosaurs and are likely the same creatures.[1] The World Book Encyclopedia declares that: "The dragons of legend are strangely like actual creatures that have lived in the past. They are much like the great reptiles [dinosaurs] which inhabited the earth long before man is supposed to have appeared on earth.".[2] Dragons are usually evil and associated with Satan, however, in the pagan belief systems of Asia, dragons tend to be regarded as divine creatures. Some creation scientists have postulated that the differing nature of dragons in the west and east may be because after the Great Flood, predatory, carnivorous dinosaurs tended to migrate westward, whereas large, plant-eating dinosaurs tended to migrate east from Mt. Ararat. The folk memories of sea serpents such as the Loch Ness monster, Ogopogo, Gaasyendietha and Argont are likely inherited stories of encounters with dinosaurs.[3] Some creation scientists have suggested that dragons, as dinosuars, died out around the end of the ice age.[4][5] However, that can not account for later encounters with dragons. Nevertheless, dragons are now either extinct or extremely rare.

The ancient Greeks knew of dragons as evidenced in the Illiad and Philostratus described dragons in India. Dragon-like creatures are mentioned in the Bible in Job 26:13, Isaiah 27:1 and Genesis 1:21 where it is known as leviathan. Many Christian saints have also encountered dragons, particularly as dragon-slayers. The most famous being Saint George but also Saint Mercurialis, the first bishop of the city of Forlì, Saint Julian of Le Mans, Saint Veran, Saint Crescentinus, Saint Margaret of Antioch, Saint Martha and Saint Leonard of Noblac.

Dragons in history and science

While scientists and historians who accept an evolution-based interpretation of history reject ancient accounts of seeing dragons – instead categorizing dragons as mythical, being loosely based on creatures such as snakes – much evidence exists that dragons were real creatures synonymous with dinosaurs.[1]