Edward Louis Bernays (November 22, 1891 - March 9, 1995) was a journalist, author, the nephew of Sigmund Freud, a progressive,[1][2][3] and an early innovator in modern techniques of propaganda and social psychology. He is widely regarded as the 'Father of Public Relations'.[4]

Bernays was a member of the Committee on Public Information, a position which helped him refine his abilities.[5]

In 1990, Life Magazine named Bernays in its list of 100 most influential Americans of the 20th century.[6]

Edward Bernays was born on November 22, 1891, in Vienna, Austria, to Eli Bernays and Anna Freud Bernays.[7] His family emigrated to America when Edward was still an infant.

Anna Freud was the sister of Sigmund Freud. 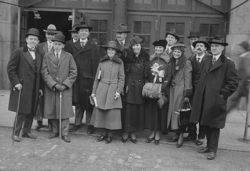 Members of the Committee on Public Information, Edward Bernays is second from the right.(Man with mustache)

In 1922, he married Doris Fleischman,[8] and they had two daughters: Anne Bernays and Doris Bernays Held.[9]

Edward Bernays was a master propagandist. Among Bernays more well known campaigns are the following:

He was retained by other clients, such as Procter & Gamble and the Mack Truck corporation.

The Century of the Self

In 2002, the BBC developed a four-part series about Bernays titled The Century of the Self, which details some of Bernays' methods and some background in psychoanalysis.[30]

Curiously, The Century of the Self goes out of its way to omit Bernays' time working for the CPI.

She also recalled his frequent use of the word "stupid":

Paul Mazur, a close friend of Bernays stated the following:

Bernays was just the man to make it happen.

Edward Bernays passed away in Cambridge, Massachusetts, on March 9, 1995. He was 103 years old.[33] His legacy is subject to considerable controversy due to the nature of Bernays methods in manipulating people. Oftentimes, Bernays' elitist progressive viewpoints are overlooked while conspiracies about corporate dominance are exaggerated in a lopsided fashion.

Another highly controversial aspect of Bernays legacy, is the use of his work in Nazi propaganda. Bernays most infamous follower was Joseph Goebbels. Edward Bernays was not a Nazi and did not support Nazi causes. However, Bernays wrote in his own autobiography:

Karl von Wiegand, foreign correspondent of the Hearst newspapers, an old hand at interpreting Europe and just returned from Germany, was telling us about Goebbels and his propaganda plans to consolidate Nazi power. Goebbels had shown Wiegand his propaganda library, the best Wiegand had ever seen. Goebbels, said Wiegand, was using my book Crystallizing Public Opinion as a basis for his destructive campaign against the Jews of Germany. This shocked me, but I knew any human activity can be used for social purposes or misused for antisocial ones. Obviously the attack on the Jews of Germany was no emotional outburst of the Nazis, but a deliberate, planned campaign.[34][35]

The Nazis learned many of their propaganda techniques from American progressives. Crystallizing Public Opinion was written only three years after the Committee on Public Information was shut down.

The following quotes are taken from Bernays' book, Propaganda: