Edward Said (1935-2003) was a Palestinian-American literary scholar and political activist on the left. He is best known for his 1978 book Orientalism. Conservatives have strongly rejected his ideas.

Said was brought up a Christian (not Muslim), but became non-religious. He was educated in British schools in Egypt then at American prep schools, Princeton and Harvard; he spent his entire academic career at Columbia University in New York City; he was active in Palestinian politics. He was a leading scholar of English literature, but was not a specialist on the history or the culture of Islam or of the Middle East.

In Oreientalism Said attacked and ridiculed all western scholarship on Islam and the Mideast, arguing it was all written in the service of imperialism. Said did not comment on whether anyone could deal honestly and fairly with Asia, for he was taking a general postmodern view that complete analysis is never possible, that Orientalism is misguided and uncritically "essentialist' when it assumes there is such as thing as the Orient in the first place. 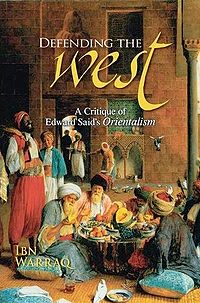 Ibn Warraq (2007) demonstrates argues that Said’s case against the West is deeply flawed. Warraq shows how Said deliberately misinterpreted the work of many scholars who knew far more about the Middle East than he. For that matter Said of systematically misrepresents Western civilization as a whole. Warraq shows that unlike the Arabs, Western civilization has to a certain extent tried to study, understand, welcome and incorporate outside ideas. Warraq demonstrates Said's thin knowledge of the history of the Middle East, and uses inadequate methodology, incoherent arguments, and a faulty historical understanding.