Elephants are two species of large land mammals belonging to the family Elephantidae, the only extant family belonging to the order Proboscidea. The two elephant species currently recognized by scientists are the African elephant (Loxodonta africana) and the Asian elephant (Elephas maximus). Centuries of hunting elephants for their ivory has reduced the population of these animals. Renewed efforts at stewardship have caused a population increase in Africa over the past nineteen years.[1]

Elephants are the largest land animals alive today. The largest elephant ever recorded (the Fenykovi elephant, now in the Smithsonian Institution) was a male shot in Angola in 1955; it weighed about 10.7 tonnes (12 U.S. tons) and stood 13 feet, 2 inches at the shoulder.[2][3] The slightly-smaller Asian elephant had a maximum recorded height of 11 feet 9 inches and eight tons in one individual recorded in 1985. Forest elephant bulls rarely exceeding eight feet in height.

Apart from their massive size their most striking features are a long trunk, or proboscis, a flexible nose strong enough to lift heavy objects. Their skin is up to 1.5 inches thick and gray in color, with the skin of African bush elephants more heavily wrinkled than their Asian counterparts. All three species possess ivory tusks, but they are generally lacking in female Asian elephants unless rudimentary in size, and even then are only seen when the mouth is open. The legs are columnar and massive; the feet are broad and round.

Some authorities consider both animals to be distinct species, with the extinct North African elephant (Loxodonta africana pharaoensis) a subspecies of the bush elephant.

The Asian elephant has three subspecies:

Bull elephants, when inclined to mate, enter a frenzied state called musth; they fight with each other for possession of the cow elephants, and become a menace to everything in their path; many humans are killed at this time. Elephants' gestation period, at 22 months, is the longest of any land mammal. At birth it is common for an elephant calf to weigh 120 kg (265 lb). An elephant may live as long as 70 years, sometimes longer.

Elephants (today generally Indian, but historically African elephants also) have been used as beasts of burden and draught animals, as mounts in processions and in war (notably by Hannibal), playing polo, and as circus performers. They are also popular for tourist rides in Thailand. Elephants are often hunted for the ivory in their tusks.

From a molecular and morphological point of view, hyraxes and Sirenians (sea cows and manatees) are the most similar living creatures to elephants,[5] and these groups are hypothesized by evolutionists to have shared a common ancestor approximately 50 million years ago. Creationists say that each kind was separately created, and that two of the elephant kind were on board Noah's Ark, and from these all elephants alive today are descended.

The three extant species of elephant are sole survivors of a much more diverse Proboscidian fauna with some 170 described fossil species and including species of mammoth from North America and the massive Deinotherium, the second largest land mammal that ever lived, which sported two downward facing tusks. According to Young Earth Creationists, some extinct elephants may represent species that did not survive the Great Flood, while some other more recently extinct species represent descendents of the two on board Noah's Ark. Regardless, extinct and living elephants represent a distinct holobaramin separate from other mammals. 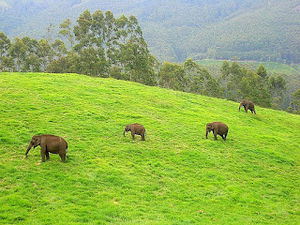