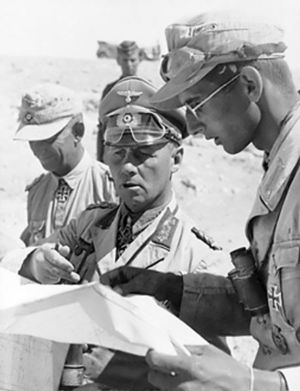 Erwin Rommel, also known as the Desert Fox (1891-1944) was a German field marshal during World War II. He was nicknamed the "Desert Fox" for his tactical genius as commander of the Afrika Korps from 1941 to 1943. Rommel was first noticed by Adolf Hitler in 1937. He was then appointed command of HQ of Czechoslovakia and then later in Poland. After this he was given command of the 7th Panzer division, because of his wonderful work at HQ. His division moved through France in June 1940 at a blistering pace, fitting the description of Blitzkrieg. After his great success in France he was appointed to command the newly formed Deutsches Afrika Korps and successfully drove the British 8th Army out of Libya. His greatest victory was at the Battle of Gazala in June 1942. German and Italian troops defeated a British force which was more than twice as large. Ninety-eight thousand British Empire troops were killed, wounded or captured. He later went on to El Alamein, Egypt, but had been hampered by a lack of supplies and was defeated at the First Battle of El Alamein. A later attempt at breaking through ended in defeat at the Battle of Alam Halfa. Rommel was then forced onto the defensive and was forced to retreat in the wake of the Commonwealth victory at the Second Battle of El Alamein.

Rommel's retreat took him the length of North Africa and ended in Tunisia, where the last stand of Axis Forces on the African continent took place at the start of 1943. American and British forces that landed in Operation Torch in 1942 advanced from the West, whilst British forces under General Montgomery advanced from the South-East, trapping the Axis forces. He was ordered to fly out of Tunisia by Adolf Hitler after Rommel expressed pessimism about the chances of a successful defence of North Africa. He arrived back in Germany on March 9.

Rommel was one the first Affirmative Action German officers who graduated through the ranks on the basis of merit in the Weimar Republic, rather than promoted in the basis of social class.

Rommel was dispatched to Greece in July 1943 to command Army Group E. The Germans, due to faulty intelligence, suspected a British invasion of the Greek coast. Only two days after he arrived, he was recalled to Germany because of the overthrowing and subsequent arrest of Benito Mussolini.

He took command of Army Group B in Italy on August 16. He had powerful divisions under his command, including the infamous SS Division Leibstandarte SS Adolf Hitler. He disagreed with Field Marshall Kesselring over strategy regarding the defense of Italy around Rome, and Hitler chose Kesselring to take overall command of the Italian theater, moving Rommel and Army Group B to Normandy in France. Rommel was then tasked with inspecting the Atlantic Wall and preparing for an expected Allied invasion of the coast.

He was in charge of Army Group B in Normandy when the D-Day operation began, but was not present when the invasion itself began. He valiantly attempted to hold off Allied forces, but Hitler's insistence on fruitless counterattacks wore Army Group B thin. While returning from the HQ of I. SS Panzer Korps, Rommel's staff car was strafed by a spitfire from the Royal Canadian Air Force. Rommel was violently thrown from the car, and suffered three fractures to his skull along with injuries to the left side of his face. He was implicated in the July 1944 plot to assassinate Hitler. Given a choice between reprisals against his family or quietly committing suicide, he chose suicide. He died October 14, 1944, after swallowing a cyanide capsule. He was 52.

Rommel is often held in high regard due to how he treated his enemies. He ignored numerous orders from Berlin to kill captured commandos and deport Jews from his area of operations. He was well loved by his men and spoke with them often. His brilliant successes on the battlefield and his well renowned chivalry made him one of the most popular generals in Germany, and garnered a great deal of respect from his enemies, with many of them praising him and British Field Marshal Montgomery even naming his dog after him. His allegiance was to Germany, not Hitler, a choice that lead to many of their disagreements and his eventual affiliation with the plot against Hitler.