Donald Trump One Two Body Blow Wednesday July 27, 2016, heavy-weight political fighter Donald Trump literally landed the most devastating series of bare knuckle body blows ever thrown during a championship bout. The pundits were stunned. The Democrats were shocked to the core. The 'Elites', The Media power brokers, their jaws hung in disbelief. Everybody was trying to figure out the implications. Nobody figured it was the greatest One-Two punch in history. 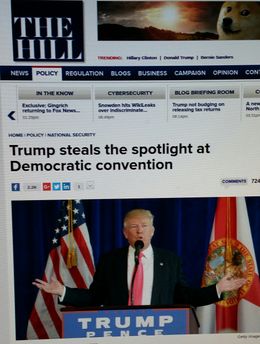 Anyone that holds a big perspective, follows the subject closely, knows that Hillary Clinton is above the law. The email scandal proves that she is corrupt. Though that is not an issue for millions of her supporters. Hillary got away with deleting 30,000 emails and claimed it a private matter, such as wedding plans and yoga. She, like some people before her, hid government information on private servers. Accountability and transparency, security and intelligence, the rules and laws were broken. Foreign government directed espionage costs are likely in the billions of dollars, eavesdropping on electronic communications being invaluable. Now these entities could effortlessly penetrate U.S. government secrets. Essential, Hillary Clinton gave a key for any of America's enemies to spy. Barack Obama's Justice Department, compromised impartiality and all, let Hillary Rodham Clinton off the hook. However, not facing charges of wrongdoing didn't change public perceptions about her character for the good. Off to the convention she went!

Wednesday is the third day at the Democratic National Convention in Philadelphia, Pennsylvania. Donald Trump enters the ring by press conference (something Hillary hasn't done in more than 200 days). The Media and The Democrats never saw it coming. Trump called on Russia to

from Clinton’s private email server. [1] Immediately after, Trump's opponents hit the mat. One, Two, Three... the world counted Four, Five, Six... They finally get up off their knees and moved to remain in focus. In stinging pain, the Democrat party sprung to defensive positions.

Democrats took a wide stance while backing towards the ropes. Their only hope? Landing a good blow and slowing Trump's momentum. Paraphrasing, Trump is guilty of espionage, violating National Security by telling Russia to release Hillary's files, interfering in American elections. Yet, Hillary testified that those files were deemed non-National Security, wedding plans and yoga appointments. All of politics were murmuring, offering their opinion, their condemnation, their defense of the matters. Deleted files belonging to Hillary Clinton are out there and can be used for blackmail. Donald Trump landed spot-on and yet the public still doesn't see the trajectory this moment had on the fight. Under the intense heat of light exposed on this contest, Donald Trump is way ahead in round one.

The Media was dazed and could not figure how to stop this message or this man. The title show, the grand spectacle, their team is facing a crushing defeat. The Media's fingerprints are all over this one contest. Russia, state secrets, first female candidate for president, businessman and tycoon. All the earmarkings of a great story. The media prop up Democrats no matter who would challenge them. The challenge is extraordinary, her opponent knows how to take on the powerful, hitting hard against political correctness and conventional wisdom. The Media desperately wants to extend the 8-years of their chosen candidate, the reining champion of politics. Trump can take it all away and they know it. It can still be disputed however, there is little doubt The Media feels sore.

So if the early rounds of this titan match are any indication, Team Hillary odds now include a possible TKO.